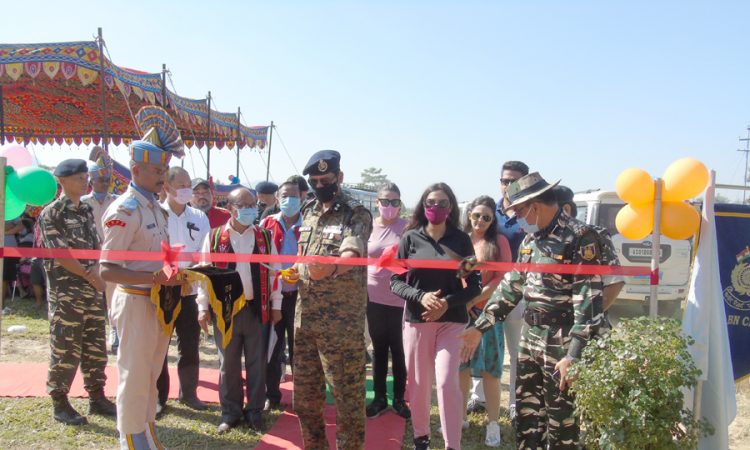 Dimapur, November 10: IGP Manipur & Nagaland Sector Randeep Datta on Tuesday laid the foundation stone at Chumukedima for the Battalion Camping Site of 173 Bn CRPF where full-fledged CRPF units headquarter on an area measuring 50.15 acres is to be shortly established.

The MHA has already accorded approval for construction of staff Quarters, Administrative blocks, Hospitals, Quarter Guard, playground, men’s club in the said project for Battalion camping site and initial survey and preliminary estimates have already been done for constructions of boundary walls.
Speaking on the occasion, the IGP said that the development will have a huge impact on the lives of the people in the area especially in terms of economy and developmental activities as the needs of the jawans will be fulfilled from the area.
He assured that the needs of the villagers will be discussed and taken care of in the days to come.
Datta, who on the occasion also distributed agricultural tools among the farmers of the area benefitting 200 families as part of the ‘civic action programme’ said that there is a need for such programs that bridge the gap between Security Forces and the local populace.
Earlier, the chairman of the Chumukedima Village Council, Razouvotuo Chatsu mentioned in his speech that there are a number of issues that the villagers are facing and it is being expected that with the coming up of the new headquarter the road conditions will be improved, there will be a central school for the children of the village, a proper water supply system, and there will be employment opportunities.
He also proposed that the village is ready to accommodate land for CRPF’s long range firing training as the earlier location selected is now being used for the upcoming Greenfield airport at Ciethu in Kohima.
The program was also attended by Syamchand De, DIGP (Ops) Kohima, Vishnu Gautam, CO-173 Bn, Thejavizo, SDO(C) Chumukedima, gaonburas and villagers. (Page News Service)