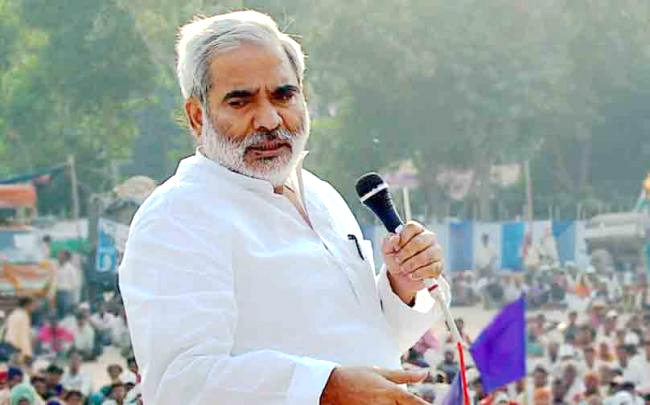 Patna, September 13: Former union minister Raghuvansh Prasad Singh died at AIIMS, Delhi on Sunday, a close aide said.
Singh died around 11am due to breathlessness and other complications, Kedar Yadav, who remains by the side of the septuagenarian, told PTI over phone.
He is survived by two sons and a daughter, he said.
Singhs wife had died earlier.
The body of the 74-year-old leader will be brought to Patna for performance of the last rites, the aide said.
Singh had fallen critically ill late Friday night and was put on a ventilator in ICU in the AIIMS, Yadav added.
Earlier in June he had tested positive for COVID and was admitted at AIIMS Patna.
He was taken to AIIMS in the national capital recently following post COVID complications.
Known as the architect of India’s biggest welfare programme, the Mahatma Gandhi National Rural Employment Guarantee Act (MGNREGA), Singh represented Bihar’s Vaishali constituency in the Lok Sabha. He was also a long-time associate of former Bihar chief minister Lalu Prasad Yadav.
The senior leader had resigned from the RJD on Thursday, apparently peeved over his marginalisation in the party in the last few years. He had stepped down as the RJD’s national vice president more than two months ago.
Yadav tweeted an emotional message soon after Singh’s death was confirmed. “Dear Raghuvansh Babu! What did you do? I told you the day before yesterday, you are not going anywhere. But you went so far. I am speechless. I am sad. Will miss you very much,” he tweeted in Hindi.
Prime Minister Narendra Modi also tweeted his condolence after Singh’s death. “Raghuvansh Prasad Singh is no more among us. His demise has left a void in the political sphere of Bihar as well as the country,” PM Modi said.
Madhya Pradesh chief minister Shivraj Singh Chouhan and CPI(M) general secretary Sitaram Yechury also extended their condolence.
“I have received the sad news on the death of former MP Shri Raghuvansh Prasad Singh. I pay my respects at his feet. May god help his soul rest in peace and support his family and supporters in this difficult time. Om Shanti,” Chouhan tweeted in Hindi.
“I am shocked at the news of Raghuvansh Babu’s death. Very sad news. We have been together in many struggles for decades. His absence will be felt a lot in today’s time. Memories of his work and behaviour will inspire us. Heartfelt condolences to his family and friends,” Yechury also posted on Twitter.
Singh had sent a handwritten resignation letter addressed to RJD chief. On the same day, Lalu Prasad sent a letter to Singh from Ranchi, making an emotional appeal to not to leave the party.
He had also written a series of letters with one addressed to Bihar chief minister Nitish Kumar, in which he had demanded changes in MGNREGA job scheme and development of Vaishali. (Agencies)