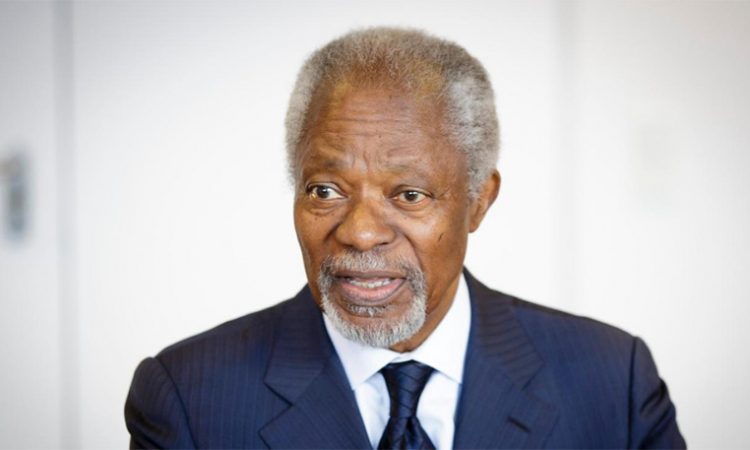 Geneva, August 18: Kofi Annan, one of the world’s most celebrated diplomats and a charismatic symbol of the United Nations who rose through its ranks to become the first black African secretary-general, has died. He was 80.
His foundation announced his death in Switzerland today in a tweet , saying that he died after a short unspecified illness.
“Wherever there was suffering or need, he reached out and touched many people with his deep compassion and empathy,” the foundation said in a statement.
Annan spent virtually his entire career as an administrator in the United Nations. His aristocratic style, cool-tempered elegance and political savvy helped guide his ascent to become its seventh secretary-general, and the first hired from within.
He served two terms from Jan 1, 1997, to Dec 31, 2006, capped nearly mid-way when he and the UN were jointly awarded the Nobel Peace Prize in 2001.
During his tenure, Annan presided over some of the worst failures and scandals at the world body, one of its most turbulent periods since its founding in 1945.
Challenges from the outset forced him to spend much of his time struggling to restore its tarnished reputation.
His enduring moral prestige remained largely undented, however, both through charisma and by virtue of having negotiated with most of the powers in the world.
When he departed from the United Nations, he left behind a global organization far more aggressively engaged in peacekeeping and fighting poverty, setting the framework for the UN’s 21st-century response to mass atrocities and its emphasis on human rights and development.
“Kofi Annan was a guiding force for good,” current UN Secretary-General Antonio Guterres said.
“It is with profound sadness that I learned of his passing. In many ways, Kofi Annan was the United Nations. He rose through the ranks to lead the organization into the new millennium with matchless dignity and determination.”
Even out of office, Annan never completely left the UN orbit. He returned in special roles, including as the UN-Arab League’s special envoy to Syria in 2012. He remained a powerful advocate for global causes through his eponymous foundation.
Annan took on the top UN post six years after the collapse of the Soviet Union and presided during a decade when the world united against terrorism after the Sept 11 attacks then divided deeply over the US-led war against Iraq.
The US relationship tested him as a world diplomatic leader. (PTI)