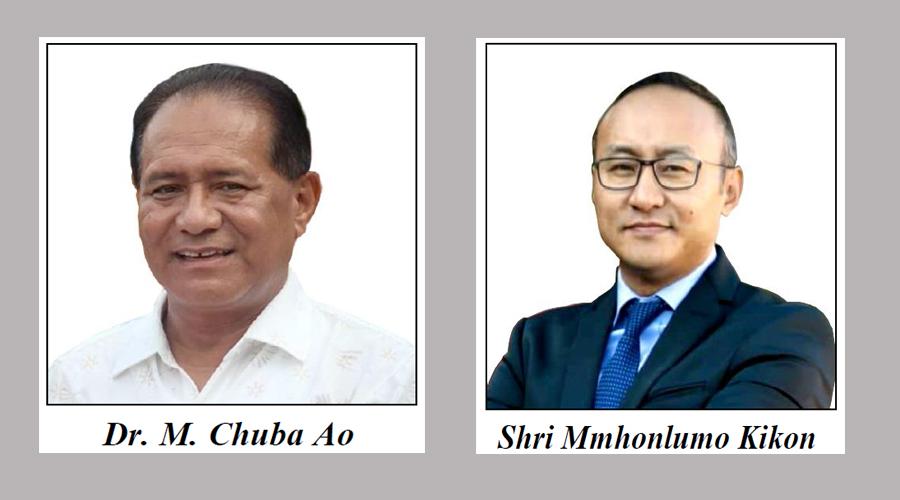 Dimapur, September 26: Two BJP leaders from Nagaland have been appointed to top posts at the national BJP level in the latest reshuffle of the party’s office bearers announced on Saturday.
Former BJP Nagaland president, Dr M Chuba Ao was appointed as national vice president while State Advisor for IT, Science and Technology, NRE, Government of Nagaland, Mmhonlumo Kikon has been appointed national spokesperson.
The new appointments were announced by BJP president JP Nadda in a re-organization aimed at combining young people, women as well as experienced faces.
Senior leader like Ram Madhav has been replaced as general secretary.
State BJP congratulates
Meanwhile BJP Nagaland State Unit has congratulated both Dr M Chuba Ao and Mmhonlumo Kikon.
“Both leaders have been doing commendable work for the upliftment of the BJP in Nagaland and for the people in their various capacities over the years,” said the State BJP media cell.
Stating that the State unit of the party is immensely proud of its two dynamic and capable leaders who have been given due recognition by the Central BJP leadership, the State BJP expressed gratitude to Jagat Prakash Nadda, National BJP president and the central team for appointing “two of our leaders to top posts at the national level”.
The BJP Nagaland assured fullest cooperation to them for the progress of the BJP under the leadership of Narendra Modi, Prime Minister, JP Nadda, National president and Amit Shah, Union Home Minister. (Page News Service)

NPF reiterates stand on ‘one solution’