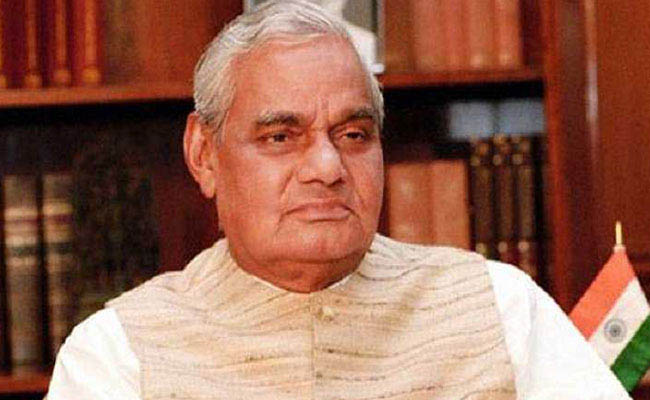 New Delhi, August 16: Former prime minister Atal Bihari Vajpayee died at the age of 93 in the national capital on Thursday. He breathed his last at 5.05 pm at All India Institute of Medical Sciences (AIIMS).
“It is with profound grief that we inform about the sad demise of Former Prime Minister of India, Shri Atal Bihari Vajpayee at 05:05pm on 16.08.2018. Shri Vajpayee was admitted in AIIMS on 11.06.2018 and was stable in the last 9 weeks under the care of a team of AIIMS doctors,” read the statement released by AIIMS.
It further read, “Unfortunately, his condition deteriorated over the last 36 hours and he was put on life support systems. Despite the best of efforts, we have lost him today. We join the Nation in deeply mourning this great loss.”
The hospital had released a medical bulletin late Wednesday evening, saying that the medical condition of the Bharatiya Janata Party (BJP) stalwart had deteriorated in the last 24 hours, and was placed on life support system.
Vajpayee to be accorded state funeral; 7 day mourning declared, flag to be flown at half mast
The government today announced seven-day state mourning as a mark of respect for former prime minister Atal Bihari Vajpayee who passed away today.
In a circular, the Home Ministry also said national flag would be flown at half mast from today for seven days across India and a state funeral would be accorded to Vajpayee.
“As a mark of respect to the departed dignitary, it has been decided that seven days of state mourning will be observed throughout India from August 16-22, both days inclusive.
“During this period, the national flag will be flown at half mast throughout India where it is regularly flown and there will be no official entertainment during the period of the state mourning,” the Home Ministry said.
The government has also decided that the state funeral would be accorded to the former prime minister.
The national flag would also fly half mast on the day of the funeral in all Indian missions abroad.
Prime Minister Narendra Modi and other Union Ministers, including Smriti Irani, Jitendra Singh, Nitin Gadkari, Harsh Vardhan, Suresh Prabhu, Piyush Goyal and Ashwani Chaubey had visited the leader at AIIMS on Wednesday evening. The visits by political leaders from across party lines continued on Thursday, with Congress president Rahul Gandhi, Bihar Chief Minister Nitish Kumar, among others, reaching AIIMS in the national capital.
Vajpayee was admitted to AIIMS on June 11 following complaints of chest congestion, kidney infection, urinary tract infection and other associated conditions. The former prime minister died after prolonged illness since 2009, when he had suffered a stroke.
Atal Bihari Vajpayee served as Prime Minister of India for three terms that began in 1996, 1998 and 1999. He was the first non-Congress, non-Gandhi Prime Minister to complete a five-year term.
Vajpayee remained a bachelor for life and was among the founding members of the Bharatiya Janata Party.
He was awarded India’s highest civilian honour Bharat Ratna on his birthday – December 25, 2014, by Prime Minister Narendra Modi-led NDA government. The then President, Pranab Mukherjee, conferred the award to Vajpayee at his residence on March 27, 2015.
Born in Madhya Pradesh’s Gwalior on December 25, 1924, in a middle-class Brahmin family, Vajpayee’s father Krishna Bihari Vajpayee was a poet and a school teacher and his mother Krishna Devi a housewife. He went to Saraswati Shishu Mandir, Gwalior and later graduated from Victoria College (now Laxmi Bai College), Gwalior with distinction in Hindi, English and Sanskrit. He went on to complete his post-graduation in Political Science from Dayanand Anglo-Vedic College, Kanpur.
He took part in the freedom struggle and was impressed by Dr Syama Prasad Mookerjee, who founded the Bharatiya Jana Sangh. Vajpayee was made the north India in-charge of the party as a secretary.
Vajpayee won his first Lok Sabha elections as a Bharatiya Jana Sangh candidate in 1957 from Balrampur in Uttar Pradesh. He won Lok Sabha elections in 1967, 71, 77 and 80. He lost the 1984 Lok Sabha elections but won 5 consecutive terms from 1989 to 2004. He also took part in the massive people’s movement spearheaded by Jayaprakash Narayan against the then government of Indira Gandhi. He was also jailed during the Emergency.
Death of Vajpayee end of an era; it’s a personal loss for me: PM
Prime Minister Narendra Modi today said the passing away of former prime minister Atal Bihari Vajpayee marks the end of an era and termed it as a “personal and irreplaceable” loss for him.
He said the BJP patriarch lived for the nation and served it assiduously for decades while noting that it was Vajpayee’s exemplary leadership that set the foundations for a strong, prosperous and inclusive India in the 21st century.
“Atal Ji’s passing away is a personal and irreplaceable loss for me. I have countless fond memories with him. He was an inspiration to Karyakartas like me. I will particularly remember his sharp intellect and outstanding wit.
“It was Atal Ji’s exemplary leadership that set the foundations for a strong, prosperous and inclusive India in the 21st century. His futuristic policies across various sectors touched the lives of each and every citizen of India,” Modi tweeted.
He said it was due to Vajpayee’s perseverance and struggles that the BJP was built brick by brick.
“He travelled across the length and breadth of India to spread the BJP’s message, which led to the BJP becoming a strong force in our national polity and in several states,” he said.
Modi said India grieves the demise of Vajpayee.
“My thoughts are with his family, BJP Karyakartas and millions of admirers in this hour of sadness. Om Shanti,” he added. (Agencies/PTI)