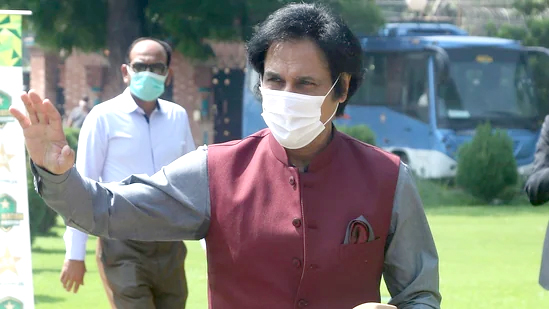 Ramiz Raja, former Pakistan cricketer and candidate for the chairman of Pakistan Cricket Board, waves to media as he arrives to attend PCB's governing board meeting, in Lahore, Pakistan, Monday, Sept. 13, 2021. Raja is set to become the new chairman of the country's cricket board. (AP)

Lahore (Pakistan), September 13: Former captain Ramiz Raja was on Monday unanimously elected as the chairman of the Pakistan Cricket Board (PCB) for a three-year term, succeeding Ehsan Mani who stepped down from the post last month.

This is Raja’s second stint with the PCB. He had served as the Board’s chief executive from 2003 to 2004.
The special meeting was presided by PCB election commissioner, Justice (retd) Sheikh Azmat Saeed at the National High Performance Centre.
Raja was nominated for the position by Prime Minister Imran Khan, who is also the patron-in-chief of the Board.
The 59-year-old commentator, who was part of Pakistan’s triumphant campaign in the 1992 World Cup, has become the fourth international cricketer to head the PCB after Abdul Hafeez Kardar (1972-1977), Javed Burki (1994-1995) and Ijaz Butt (2008-2011).
Raja, who played more than 250 international matches for Pakistan from 1984 to 1997 and scored 8,674 runs, replaces the country’s veteran cricket administrator Mani.
Raja said one of his biggest aims is to bring back the glory days of the Pakistan men’s team that was once a force to reckon with in the international arena.
Addressing the Board of Governors (BoG) following his election, Raja said: “I am thankful to all of you for electing me as the PCB chairman and look forward to working with you to ensure Pakistan cricket continues to thrive and grow stronger, both on and off-the-field.”
“One of my key focuses will be to help introduce in the Pakistan men’s cricket team the same culture, mind-set, attitude and approach that once made Pakistan one of the most feared cricket playing nations.
“As an organisation, we all need to get behind the national team and provide them the desired assistance and support so that they can produce that brand of cricket, which the fans also expect from them each time they step on to the field of play.”
In 2003-04, he had also served as the CEO of the Board under the chairmanship of Shahryar Khan.
The former opener added, “Obviously, as a former cricketer, my other priority will be to look into the welfare of our past and present cricketers.
“The game has and will always be about the cricketers and, as such, they deserve more recognition and respect from their parent institution.”
Impossible right now but we are not in hurry: New PCB chief Ramiz Raja on bilateral cricket with India
Newly-elected Pakistan Cricket Board chairman Ramiz Raja on Monday said resumption of bilateral assignments with India is “impossible right now” and he is “not in a hurry” for it either as his focus is solely on his country’s domestic circuit at this point.
The 59-year-old, who formally took over on Monday after being elected unanimously, also acknowledged that being chairman of the PCB is one of the toughest jobs in cricket.
“It is a very big challenge and a lot of boxes had to be ticked before the prime minister (Imran Khan) decided to give me this tough job,” he said in a press conference here.
Asked about the possibility of revival of bilateral series between Pakistan and India, Raja said, “Impossible right now…”
“…because the sporting model has been spoiled by politics and right now it is a status quo and we are not in a hurry on this issue because we have to focus on our domestic and local cricket,” he added.
He also expressed his displeasure over the development that there would be no Decision Review System in the upcoming Pakistan-New Zealand white-ball series in Rawalpindi and Lahore.
“Yes there is no doubt that this DRS issue reflects a mess and I will look into this matter,” he said.
Raja expressed his reservations over the standard of coaching in the country and said there was a dire need to improve the local infrastructure in the country.
When asked whether he would allow the board CEO, Wasim Khan, to carry on, Raja made it clear that he would not discuss internal matters of the body in public.
However, he claimed that if it came down to proper accountability 90 per cent of the functionaries deserved to be sacked from the board.
Raja was also asked about the India-Pakistan match in the coming T20 World Cup in Dubai. The game is due on October 24.
“It is a show stopper and when I met with the Pakistan team players I told them I want the tables to be turned this time and the team must be 100 percent operational for the match and to do well in it,” he said.
The new PCB Chairman also said that he wants the national team to play fearless cricket.
“We must be prepared to face problems and also lose matches but I have told the players they shouldn’t worry about being secure about their places in the team and play fearless cricket.
“I know we will face more failures than success when we go on this path but we have to do it if we are to become relevant in world cricket. Because this is a process and we need to change the mindset of our players as well.”
Raja is Pakistan’s 18th Test and 12th ODI captain, and played 255 international matches in which he scored 8,674 runs in the period from 1984 to 1997.

He has previously served the PCB as its Chief Executive from 2003-2004 and has represented Pakistan on the ICC Chief Executives’ Committee and presently sits on the MCC World Cricket Committee.
After retirement he has been a successful broadcaster. (PTI)