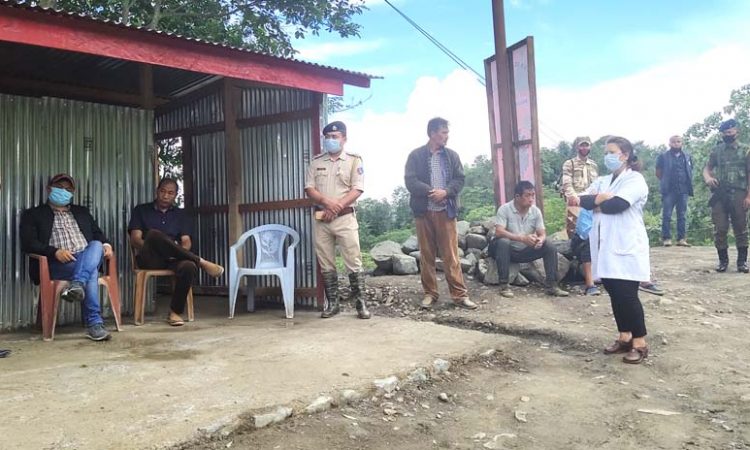 Former MLA Kropol Vitsu, SAPO leaders and others interacting with the frontline workers at Khuzama Check Gate Kohima on June 12, 2020.

Kohima, June 12: Former MLA and public leader in Southern Angami-II Assembly Constituency of Kohima district, Kropol Vitsu and Southern Angami Public Organisation (SAPO) officials today inspected the preparedness of the Tuberculosis (TB) Hospital and also the Inter-State check gate under Khuzama village of Kohima district.
The 20 bedded TB Hospital Khuzama has been converted into COVID-19 isolation block for patients with mild symptoms as Plan C in case of overflow of COVID-19 positive patients at the two COVID-19 hospitals at Chedema Ayush Hospital and Naga Hospital Authority Kohima (NHAK).
On the other hand, Khuzama Check Gate is the inter-state check post between Nagaland and Manipur.
At TB Hospital, the former MLA of the Constituency, Vitsu interacted with the Senior Medical Officer Dr Mezhünuo Angami and Medical Officer Dr Ziwang and their staff, who apprised him of the conversion of the TB Hospital into COVID-19 Isolation ward.
Dr Mezhunuo informed them that they have two doctors and sufficient health workers, with 300 PPEs, 100 N95 masks and other facilities to take care of the patients with mild symptoms. Currently, there are not such patients in TB Hospital Khuzama while the hospital has also stopped admitting TB patients. She said that only OPD patients are being taken care of in the hospital.
The medical staff and health workers are also screening the stranded persons of Nagaland returning to the State from Manipur and directing them to different quarantine centres in the State capital, she said.
Dr Angami also shared the problems of encroachment of the hospital land.
In this, Vitsu lauded the efforts of the hospital staff meeting the daily challenges in the fight against COVID-19. He also asserted to take up the problem of encroachment of hospital land and staff quarters with the government authorities.
Also visiting the Khuzama check gate, Vitsu interacted with the SDO(C) Alemyapang Longchar, 2nd OC Khuzama PS Huchu Dazo, the medical officers and staff of Khuzama TB hospital involved in screening of returning Naga citizens from Manipur.
He acknowledged them saying that as frontline workers they have been extending selfless services to contain the import of COVID-19 into the state.
He encouraged them not to be deterred in giving their best service despite the lack of proper infrastructure.
The former MLA also asserted them of all support including the need to pressure the health department in providing disinfectant spray machines, which has not been made available despite several appeals from the local administration, Southern Angami Public Organization (SAPO) and Southern Angami Youth Organization.
He asserted that the credit for containing the virus from spread among the community goes to the villagers, who had initiated locking down the entry and exit of villages by erecting barricades even before the government announced the lockdown.
Meanwhile, Vitsu also lamented the deplorable road condition of the National Highway-2 connecting Kohima and Mao Gate.
During the visit, Vitsu also extended financial support towards the COVID-19 activities of the villages under Southern Angami-II Assembly Constituency, SAPO, office of SDO(C) Jakhama, Medical staff and Police manning Khuzama Check Gate. On his way, he also interacted with the Khuzama Youth Organization and also extended financial support.
He also lauded the Khuzma Village Council and KYO for supporting the state government’s efforts in the fight against COVID-19.
The former legislator, who lost the 2018 elections, was accompanied by SAPO general secretary Mhale Luho, Khuzama Village Council Chairman Tepulel Thaprü, and his supporters to both the places.
(Page News Service)