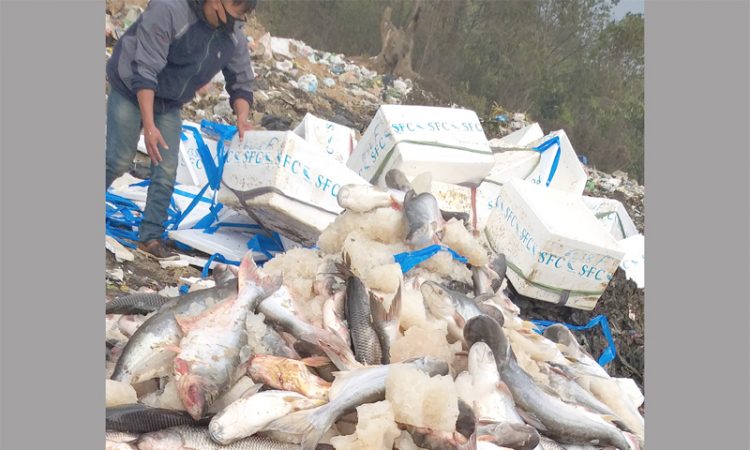 Dimapur, March 4: Even after banning fishes in the markets, corrective measures undertaken to not let formalin laced fishes enter Nagaland, and dialogue with the Government of Andhra Pradesh resulting certification of each consignment originating from the state declaring that they are formalin free, the woes of the Nagaland Government don’t seem to fade.
In latest developments regarding the entry of formalin laced fishes into the state, fishes being sold in the markets of Kohima, Mokokchung, Zunheboto and Wokha have been found to be formalin laced and without proper certification and in helter-skelter, as put by Minister for Health and Family Welfare, S Pangnyu Phom.
An emergency meeting with various responsible bodies and individuals was held on Monday here at DC Office, Dimapur headed by Phom.
While Phom, along with others, put forward the case of formalin contaminated fishes making their way into Nagaland, M Veera Satya, Secretary, Andhra Pradesh Fish Traders (APFT), however, refused that it could have happened.
Satya defended that there are five companies that are presently sending fishes to Nagaland and none of them are adding the chemical onto the fishes and if there is formalin detected on the fishes, it can very well be the naturally occurring form of the chemical and not the additional one.
He added that the fishes can be tested with the standard CIFT rapid detection kit as the method being used to detect formalin here in Nagaland might be picking up the naturally occurring formalin in dead fishes for additional formalin and leading to the confusion.
He also proposed that if it is agreed upon, a delegate from the state should go to Andhra Pradesh and inspect the process that the fish suppliers are following for clarity.
But representatives from Food and Civil Supplies Department disagreed and argued that the process which the department follows doesn’t take into consideration the naturally occurring formalin and only detects the additional chemical.
They also questioned the CIFT kit saying that the kit only shows positive result if the content of formalin is equal or more than 4 ppm. What if the content is lower than that and what is the guarantee that the presence of formalin lower than 4 ppm is natural and not artificial, they asked.
Food Safety Officer, Dimapur, Samuel Zehol stated the Food Safety and Standards Regulations 2011 clearly states that the content of formalin must be zero and therefore it is how it should be. If there were a permissible limit according to the act we’d have followed that, he said.
Interestingly, after the issue of formalin laced fish was raised in October last with the Government of Andhra Pradesh, the consignment that reached immediately after that on October 17 contained zero content of formalin.
Referring to that consignment, Dr K Vikato Kinimi, CMO Dimapur and Dr Khekugha Muru, Chairman, CNCCI said that if that consignment could be perfect, the consecutive consignments should also be.
There are, nevertheless, loopholes in the way the fishes are entering Nagaland and it came to light during the meeting, Satya claimed, answering to Phom and DC Dimapur Kevekha Kevin Zehol about why uncertified fishes are being sold in parts of Nagaland.
While all the consignments originating from Andhra Pradesh and destined to Nagaland are sealed, certified, and have no stoppage in between, there are also fishes that are entering from Assam and these fishes are often the ones that are unsold in Assam and might contain formalin.
Most of these enter through Mariani, which is one of the only two entry points to the state, the other being Dimapur.
Samuel Zehol agreed and said that fishes in small unhygienic containers from Assam do find their way into Nagaland through buses and others non-conventional modes.
When DC Dimapur questioned the representative from the police regarding such imports, he said that the police cannot test fishes but from now onwards measures would be taken to regulate the fishes entering from Assam to the state and assist the government in every possible way on this issue.
Minister Phom said that the department will take into consideration the suggestions of all on the issue as well as have dialogue with the Government of Andhra Pradesh and formulate plans to go about this.
While the focus is on fishes, it should also be on every edible item entering the state, he said.
According to Satya, it is estimated that on an average 10 to 15 tons of fishes enter the state every given day. (Page News Service)