HomeTop StoriesFor the spirit of the Fourth Estate to continue, we must not sell ourselves: Krome
Top Stories
8 months agoNovember 17, 2020Kohima Press ClubNagalandNational Press Day 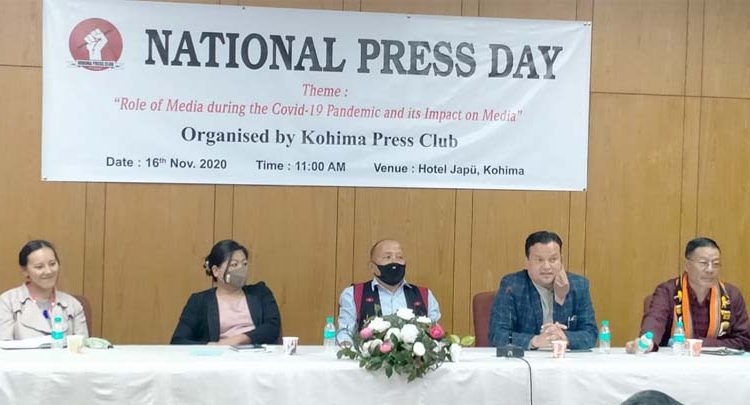 Members of Kohima Press Club during the National Press Day celebrations at Kohima on November 16, 2020.

Our Correspondent
KOHIMA, NOVEMBER 16: Journalists of the day in Nagaland must leave a legacy for the upcoming generation where they will not be afraid to write and speak the truth, stated Advisor, Kohima Press Club, Kopelo Krome, at the celebration of National Press Day which was organised by KPC, at Japfü Hotel, on November 16.

This year’s press day at Kohima was observed on the theme “Role of Media During COVID-19 and Its Impact on Media”, followed by a panel discussion on ‘Journalism and Journalistic Ethics: A Relook’ and ‘Role of Media during COVID-19 Pandemic’.
Speaking on the role of the media during the pandemic, Krome shared that the State Government of Nagaland turned evasive and was not cooperative when the media became investigative.
Pointing out that media is being manipulated globally in present times; he encouraged the journalists to continuously aspire to uphold the ethics of journalism. He also said, “For the spirit of the Fourth Estate to continue, we must not sell ourselves.”
Expounding on journalistic ethics, Senior Journalist, Nagaland Post, Emilo K Konyak said “The moment we compromise our ethical values we are doing an injustice to society. It is like handing a remote control to somebody to have control over us.”
She also said the kind of incoherence and unreliability in information received from Government Departments was baffling because of the ever changing figures and unverified nature of data being released by the Departments. This presented a great challenge to journalists in Nagaland in providing an accurate report to the people.
Konyak also elaborated on the five cores of journalism with special emphasis on accountability. She also talked about the role of the media in these trying times and how the journalists of Nagaland did their job even with inadequate resources.
Also speaking at the event, Senior Journalist for Press Trust of India (PTI) Narayan Bahadur recounted the changing nature of challenges presented to the press fraternity of Nagaland over the decades.
Even though a ceasefire agreement was signed between the Underground groups and the Government of India in 1997, the ground reality was that the press had to face the brunt of it, he said.
He further pointed out that the challenge for the media in present day has surfaced through the onset of pandemic. Sharing an experience which he had to go through as a journalist in Nagaland, Bahadur said “A legislator did not want me to be in the press conference because I questioned them directly, I wanted facts and figures.” The legislator even went to the extent of being particular about not wanting to have him in the following press conference, he added.
While emphasizing on the core principles of journalism that needs to be accompanied with the basis of journalism which are the 5 Ws and H, he also talked about how important it is for a journalist to be balanced in his reporting no matter the circumstances.
President, Nagaland Press Association, H Chishi said Nagaland is fighting battles on two fronts; one is with the COVID-19 and the other is the ‘infodemic’. We are bombarded with fake news and there is so much misinformation and disinformation, he said.
Despite the challenges, it is important to revisit and have a relook on the ethics of journalism as a reporter, correspondent and journalist in these trying times, he said.
Also speaking on the ethics of journalism, Senior Journalist of Morung Express, Vibi Sophie said “Times have changed but ethics remain absolute. And journalistic ethics have become even more relevant in this digital age and post truth era.”
Sharing her experience and understanding of journalism and its ethics specific to the society and the community in which she is a part of, Sophie focused on the basic elements of journalism while drawing the main tenets from Bill Kovach & Tom Rosenteil’s ‘Elements of Journanlism’.

She asserted that Journalism’s first obligation is to the Truth, Journalism’s first loyalty is to the citizens and that Journalism must strive to keep the significance interesting and relevant. While maintaining that the media in Nagaland is progressive, Sophie emphasized on the need to contextualise and make our issues more relatable, else it will leave us far behind again because those issues are not relatable to our society, she added.
Alongside the programme, Journalist for NE Live, Sarah Naam and Freelance Journalist Atono Tsiikrii Kense were awarded “KPC Impact Journalism 2020”, in recognition of positive journalistic work during the pandemic. Also, Freelance Journalist and Publisher of PenThrill Publications, Vishii Rita Krocha bagged the article writing competition along with Zhovezo Resu in photography category which was conducted by the club based on the theme.