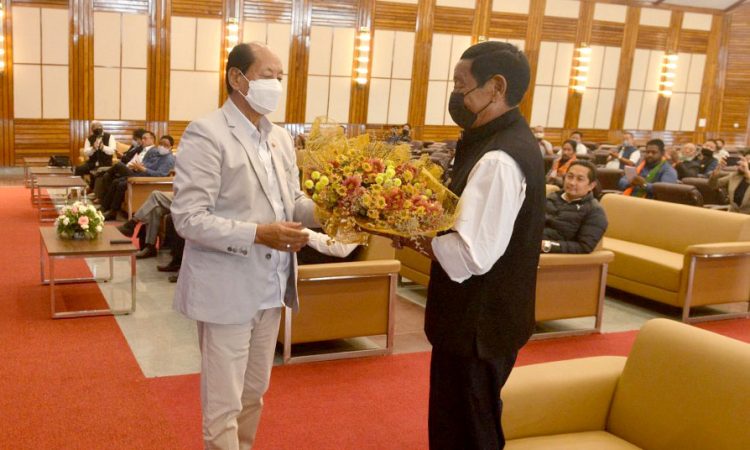 Kohima, April 6: The People’s Democratic Alliance (PDA) government on Tuesday held a thanksgiving programme to commemorate the completion of three years in office and the recent election victory of H Chuba Chang, who was elected unopposed to 51-Noksen Assembly Constituency.

The programme was held at the State Banquet Hall, Chief Minister’s Residential Complex in Kohima. The PDA completed 3 years in office on March 8.
Chief Minister Neiphiu Rio lauded the people of Noksen Assembly Constituency and the PDA alliance for choosing “the best candidate and the right person”.
He also appreciated the wisdom of alliance partner BJP, and the other four ticket-seekers for paving the way for Chuba Chang to be elected unopposed. He also appreciated Chingmak Chang, former-NPF candidate who lost the last elections, for standing by NDPP.
“An excellent precedent has been set and party discipline has been exemplified,” said Rio.
He said that NDPP was grateful to the government of India under leadership of Prime Minister Narendra Modi, Union Home Minister Amit Shah and BJP National president JP Nadda for their constant support and solidarity.
Stating that Chang is a senior leader with tremendous experience, Rio hoped that he would bring mature leadership to the PDA team. “His vast experience will be an asset to all of us,” he said.
Rio also said that the thanksgiving service was significant as it comes in the backdrop of the completion of three years of PDA government.
“While we have made progressive achievements, we were also bogged down by an entire year of battling the global pandemic,” he said, adding that the remaining two years of the government tenure were most crucial and important in fulfilling the promises of the manifestos and the Common Minimum Programme.
“We need to constantly be guided by these commitments which we have given to the people and it is on this basis that the people have given their mandate to us,” said Rio.
Rio also stated that there were several crucial and important issues that the government continues to face but the most important agenda was to deliver good governance under a spirit of transparency and justice.
“We assured meritocracy to the people and we continue to make efforts towards enhancing meritocracy,” he said adding that efforts like the establishment of the Staff Selection Board, removal of VIP culture, improved e-governance and use of technology to combat governance challenges remain at the core of the government’s initiatives.
The CM called upon the PDA partners and the party leaders to collectively make efforts that are aimed at making the people understand and realise the various initiatives and projects of the government.
Rio also spoke about his recent visit to Delhi saying “we had meetings with NNPGs and the NSCN leadership along with our friends in the Opposition led by the Leader of Opposition”.
“As far as our approach to the Naga political issue is concerned, the elected members of the Nagaland Assembly have risen above party affiliations and we have come together under a spirit of oneness in order to facilitate the peace process for an early and honourable solution,” he said.

Deputy Chief Minister and BJP legislature party leader, Y Patton said that BJP-NDPP alliance is ‘doing a good job at winning the hearts of the people under the leadership of Rio’.
Patton, on behalf of BJP legislators, congratulated Chang and wished that his fifth innings as a legislator would be of major boost to PDA.
PDA chairman and NDPP president Chingwang Konyak congratulated the newly elected MLA. His election unopposed is because PDA partners stood solidly behind him, he said.
The newly-elected MLA, Chang thanked God ‘for the opportunity’ and also the NDPP leadership for giving him the ticket from among the 5 applicants. He assured to put his best effort to uphold the party motto. (Page News Service)