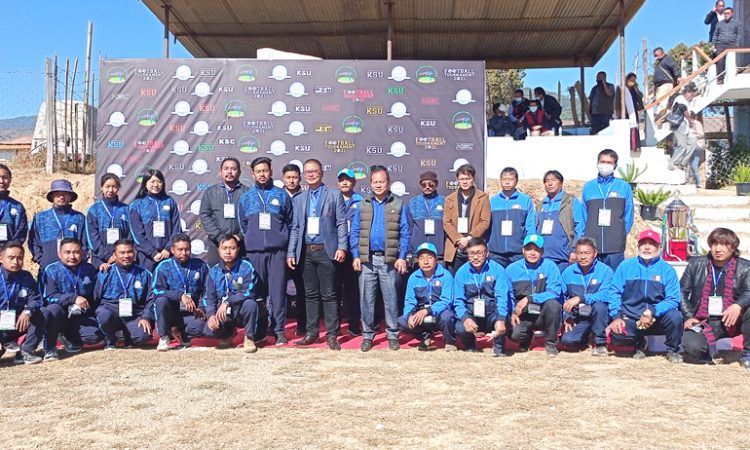 Our Correspondent
Tuensang, January 5: The Khiamniungan Students’ Union in collaboration with Khiamniungan Sports Council organized a Football Tournament at Noklak on the theme “Invigorating the Talent”.
The inaugural programme was held today with Colo Mero, Vice President, Nagaland Football Association as the special guest.
In a short speech, Er. Elo, President, Khiamniungan Sports Council underscored that in field of sports, the mindset of backwardness should be done away with. “This is the time for us to unite. Khiamniungans must unite as one and strive towards excellence, keeping aside differences”, he added.
In his speech, Colo Mero mentioned that only the deserving ones must qualify for any kind of sport, further adding that sports require sacrifice and commitment. “If we aim to play at higher levels, proper training must begin at the grassroot level such as schools and villages.” he mentioned.
Mero also expressed that young people today must not substitute the sport with education and career if it is only seasonal but keep the sport as a hobby, further adding that “talent, discipline and hard work” are essential to excel.
He mentioned that initiatives should start from the grassroots level on the importance of games and sports, organizing sports activities in schools and villages so that many sportsmen will come up from the district. Encouraging the players, he also advised the players to be disciplined in all areas.
The inaugural programme was chaired by P. Khumo and invocation was pronounced by A. Penglang, Associate Pastor, Longdon Baptist Church Noklak Town (LBCNT). S. Sheying, Games and Sports Secretary, KSU expressed the welcome note. L. Lathei presented a special number.
Indian Red Cross Society Noklak District Branch set up a stall for awareness of COVID-19 and distributed face mask and soap to participating teams. Altogether 19 teams are participating in the tournament, which will culminate on January 14.
The official league was kicked off by the special guest.
In the first match Thangnokyan Students’ Union won against Kingniu Students’ Union (3-0).
The second and third matches concluded with a draw with a score line 1-1 played between Wonthoi Students’ Union and Panso Town Students’ Union, and Nokhu Nokeng Students’ Union and Sanglao Students’ Union respectively.