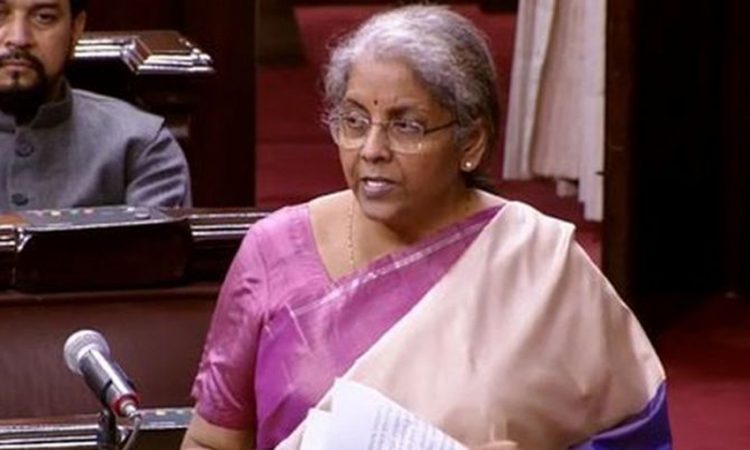 New Delhi, February 12: Finance Minister Nirmala Sitharaman on Friday reeled out pro-poor measures such as free ration and gas to hit out at Opposition parties for creating a “false narrative” of the Modi government being pro-rich and said her Budget for the next fiscal has provided stimulus to the economy for a sustainable high growth rate.

She took on former finance minister P Chidambaram for questioning the numbers in her Budget, saying unlike the UPA regime when an “artificial” increase in capital spending was shown to project growth and subsidy shifted from the government budget to companies, the Budget for 2021-22 brings transparency by bringing all spending on book.
Replying to a debate on the Budget in the Rajya Sabha, she said spending on defence for the fiscal beginning April 1 has increased both on revenue and capital side and there is a decline only in provision for pensions as the previous year’s spending included payment of arrears for the one-rank-one-pension (OROP) scheme.
“A false narrative is created to accuse that this government works only for cronies,” the finance minister said as she reeled out statistics to show the government’s pro-poor policies.
Taking on Chidambaram, who in his speech called the numbers in the Budget “suspect”, Sitharaman said the former finance minister during his term in 2007-08 showed Rs 40,000 crore fiscally neutral transaction of acquiring the RBI’s stake in SBI under capital expenditure to show a 62 per cent growth in spending.
If this is taken out, “growth rate was only 9 per cent”, she said, asking if this was not ‘suspect’.
She said her Budget for 2021-22 has provided the highest capex growth of 34.4% by providing more money to railways, roads and defence, and not Chidambaram’s.
“That was the wrong statement to make. We have not done fiscal routing,” she said.
Also, during the UPA era, oil companies, fertiliser units and the Food Corporation of India were issued special bonds to clear their subsidy dues and these bonds did not reflect in the government budget.
“False narratives were created,” she said. “Prime Minister Modi does not depend on fudging.”
She said there was a lot of “grudge” in the former finance minister’s speech.
“Grudge not to recognise how Prime Minister handled corona crisis” that results in fewer deaths per million and lower active cases when countries have seen wave after wave, she said.
Sitharaman further said the benefit of rural roads, free gas and electricity connection, and direct benefit transfer does not go to the rich.
More than 1.67 crore houses for the poor were constructed under the PM Awas Yojana, 2.67 crore households provided electricity connections, 8 crore rural women households given free cooking gas LPG connection and 9 crores got scholarships. “Is that for the rich?,” she asked.
As much as 2.11 lakh kilometres of rural roads were built in the last six years. “Are those villages for rich?,” she asked.
While Rs 8 lakh crore worth of transactions were done on the government e-marketplace, Rs 3.6 lakh crore digital transactions happened on the UPI.
She said Rs 2.79 lakh crore was spent on giving free foodgrains to 80 crore during the pandemic and cash to 40 crore farmers, women, disabled and elderly.
Also, 11 crore small and marginal farmers have got Rs 1.15 lakh crore since the start of the scheme to give cash support to them.
Is e-marketplace used by rich, she asked. “UPI is used by rich, corporates? Is this government creating UPI, facilitating digital transactions to help some rich cronies, some damads (sons-in-law). Not at all. It is helping only the poor.”
When some Congress members objected to her using the term ‘damads’, she said, “Damad I didn’t think is a trademark of Indian National Congress. Damad har ghar mein hota hai (sons-in-law are there in every household) but damad in Indian National Congress is a specialised name.”
Her statement was an oblique reference to Robert Vadra, son-in-law of Congress President Sonia Gandhi. Vadra has been accused of getting illegal favours during the UPA regime.
Congress and Vadra have previously denied all such charges.
“It has now become sort of habit for some in opposition to constantly allege in spite of steps taken to help the poor and needy in the country,” she said. “Budgetary provisions are made for poor, Dalits, tribals and the students.”
The Budget is an “instrument” to attain Aatmanirbhar Bharat (self-reliant India) and provides an economy battered by pandemic a “strong stimulus” of a record capital spending on demand-creating infrastructure building that can bring “multiplier effect”.
The stimulus together with systemic reforms undertaken during the pandemic last year “are going to sustain the growth, sustain ease of doing business and sustain entrepreneurial skills,” the finance minister said.
These will give India a sustainable GDP expansion and “a growth trajectory which will maintain us as one of these fastest-growing economies in the world,” she said.
The spending will create demand in the economy as well as jobs. On privatisation of profit-making PSUs, Sitharaman said market reforms have been the consistent policy of BJP and the Jan Sangh, unlike Congress which moved from “high socialism” and inspector raj to opening up and globalisation in 1991.
“It is a position consistent with ideology (of) respecting wealth creators, respecting taxpayers,” she said.
She justified including water and sanitation under health to show more than doubling of expenditure on that head by pointing to a WHO report that sanitisation was part of healthcare.
Actual allocation for the Ministry of Health and Family Welfare has gone up by 9.6% for next year and that of Ayush Ministry by 40%, she said.
On defence, she said revenue expenditure budgeted for 2021-22 is 1.3% more than the previous year and capital spending is 18.8% higher.
She cited data to drill holes in Congress’ claims for the rural employment guarantee scheme MNREGA, saying actual spending from 2009-10 to 2014-15 was lower than budgeted.

MNREGA under Congress was a “mess” with utilisation far less than budget provision, she said. The Modi government “removed ills out of the scheme and effectively utilised it”.
“I want a less emotional but more factual debate on MNREGA,” she said, adding her government spent more than budgeted in the last six years.
In the current 2020-21 fiscal that ends on March 31, Rs 61,500 crore was provided in the Budget but the provision was increased to Rs 90,469 crore in view of the support needed to help those in distress during the pandemic.
The actual spending till now is Rs 90,469 crore, she said, adding for the next fiscal Rs 73,000 crore has been provided.
On the cash dole scheme of PM Kishan Samman Yojana providing Rs 10,000 crore less in current and the next fiscal, she said this was because of “rationalisation” of expenditure following the West Bengal government not providing the list of 69 lakh beneficiaries. (PTI)