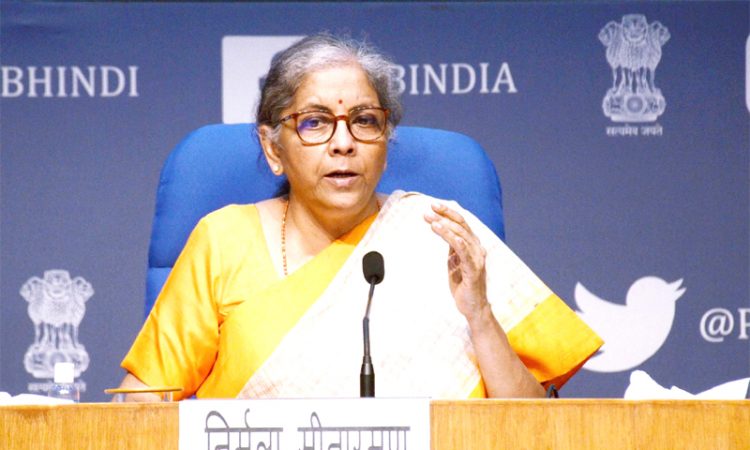 The Union Minister for Finance and Corporate Affairs, Smt. Nirmala Sitharaman holding a press conference, in New Delhi on November 12, 2020.

New Delhi, November 12: Finance Minister Nirmala Sitharaman on Thursday announced tax relief on select home sale deals, enhanced credit guarantee programme for small businesses and provide incentives for new job creation as the government widened stimulus measures to boost the economy.
The measures, that also include additional fertiliser subsidy and already announced production-linked inventive scheme for manufacturing units, totalled Rs 2.65 lakh crore, taking the cumulative stimulus package announced since the lockdown to almost Rs 30 lakh crore, or 15 per cent of the Gross Domestic Product (GDP).
It also includes additional funding for real estate developers and contractors, a new employment scheme and additional spending on the rural jobs plan.
Sitharaman cited data, including increase in tax collections for goods and services, rise in energy consumption and improvement in bank credit to state that the economy was seeing “strong recovery” taking root.
The Indian economy has recovered from its worst-ever contraction of 24 per cent in the April-June quarter but will end up shrinking by close to 10 per cent in the fiscal year to March 2021.
But she saw hope in the Reserve Bank of India predicting a strong likelihood of growth in the current quarter.
Doubling down on the previously announced measures, she said income tax law will be relaxed to allow primary or first sale of housing units of up to Rs 2 crore at a price that can be 20 per cent below the stamp duty circle rate.
Currently, the law restricts differential between circle rate and agreement value at 10 per cent, and “the move will help reduce hardships faced by both home-buyers and the developers and help clear unsold inventory,” she said.
Under the new job creation scheme, the government will provide a subsidy equal to the contribution that an employee and the employer have to make towards the retirement fund (totaling 24 per cent of the wages) to establishments that hire new employees or re-hire those it fired during COVID-19 pandemic, she said.
The Rs 3 lakh crore Emergency Credit Line Guarantee Scheme (ECLGS), under which small businesses can get collateral-free loans, has been extended till March 31, 2021.
The same has also been extended to 26 stressed sectors identified by a high-level committee as also the healthcare sector. The companies will get a one-year moratorium on loans and four more years to repay the amount, she said.
Sitharaman counted a production-linked incentive programme worth Rs 1.46 lakh crore for manufacturing units, already approved by the government, as part of the 12 support measures unveiled on Thursday.
In the past, Rs 51,355 crore of incentives has been provided for mobile manufacturing, drug intermediaries and manufacturing of medical devices and now automobiles, telecom, textile and food products, white goods, specialty steel and electronic products have been included.
An additional outlay of Rs 18,000 crore will be made towards the affordable urban housing programme, she said.
To provide higher liquidity to contracts, the government has decided to lower the earnest money deposit for projects till December 31, 2021.
Also, Rs 10,000 crore was provided for rural employment, Rs 3,000 crore to Exim Bank for extending lines of credit, Rs 10,200 crore additional budget outlay for defence and infrastructure.
A Rs 900 crore grant was made to the Department of Biotechnology for COVID-19 vaccine research, she said, adding this did not include the cost of procuring and distributing the vaccine which will be established later.
Sitharaman said the government will provide Rs 65,000 crore of additional subsidy on fertiliser to ensure the crop nutrient is available to farmers during the current season.
The measures are the government’s latest efforts to boost the economy, which slipped into an unprecedented recession after gross domestic product probably declined for a second straight quarter in the three months ended September.
The Rs 29.87 lakh crore stimulus package, spread over five announcements over the past few months, includes Rs 12.71 lakh crore of liquidity boosting measures by the Reserve Bank of India (RBI).
The previous stimulus measures announced included free foodgrains and cooking gas to the poor and cash support to some.
The International Monetary Fund (IMF) has forecast that the Indian economy will shrink by 10.3 per cent in the year to March.
“Recovery (in economy) is happening,” Sitharaman said, pointing to some high-frequency indicators.
“In the last 10-15 days, there have been quite a few steps and indicators which have shown the recovery is happening. The PMI has risen to 58.9 in October. This is the strongest increase in output in close to nine years. This shows that is not just pent up demand but a strong pitch for recovery,” she said.
Further, Sitharaman said, “a total of 15 per cent of GDP is what is being given here as stimulus till today.” (PTI)