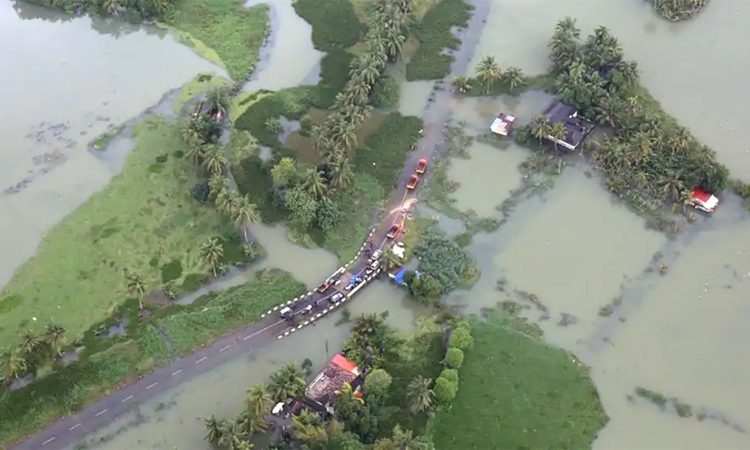 Kochi and New Delhi, August 19: Rescuers struggled to reach some pockets still cut off by landslides and raging rivers in Kerala, and the government turned its focus to counting losses and launching a rehabilitation drive that could last months, officials said on Sunday as forecasts suggested the worst of the rains may be over for Kerala.
Since August 8 — the start of an unusually heavy bout of monsoon rains that led to what has been described as Kerala’s worst flooding in nearly a century – some 239 people have died and more than 700,000 people were taken to relief camps, according to figures released by the state government on Sunday.
Chief minister Pinarayi Vijayan said much of the rescue operation was likely to be completed by end of Sunday, but “it will continue till the last person is rescued.” The CM added that there were 13 new deaths and some 22,000 people rescued since morning.
At Chengannur in Alapuzha district, at least 5,000 are stranded, according to revenue officials quoted by PTI.
“The waters have not fully receded; there is moderate rain in some parts. Rescue work will continue till things go back to normal,” the CM said at a press conference.
In New Delhi, the National Crisis Management Committee met for the fourth time in as many days.
Union cabinet secretary PK Sinha asked for focus to be shifted to arranging supplies of food, water, medicines and restoration of essential services such as power, fuel, telecom and transport links.
The chief secretary of Kerala too joined the meeting through video link and he informed the NCMC that the situation is gradually improving and the meteorological department has forecast less rainfall from Monday onwards.
Vijayan pegged the value of losses at roughly Rs 19,200 crore — nearly a fifth of what the state had spent for the entire year in 2017-18. According to state disaster management officials, more than 10,000 kilometers of roads and bridges have been damaged. One of the state’s major airports, in Kochi, has been flooded.
The chief minister said fishermen – who have been among the key rescuers – will be compensated at the rate of Rs 3,000 per day in addition to fuel reimbursements, and students who lost textbooks will be given new ones free of cost.
Help has poured in from across the country for Kerala, with several state governments pledging crores in financial assistance and NGOs collecting items of basic necessities and sending them to the flooded state. Prime Minister Narendra Modi on Saturday announced a Rs 500-crore financial package to help Kerala, an offer that his rivals and some in the state’s ruling CPI(M) said was inadequate.
In the coming days, the biggest concerns for officials include staving off disease outbreaks. Anil Vasudevan, a Kerala health department official, was quoted by news agency Reuters as saying that three people with chickenpox had to be isolated in one of the relief camps in Aluva.
The task is exacerbated by a lack of coordination and adequate manpower. VD Sateeshan, a Congress legislator from Paravur, Ernakulam, criticised the state health ministry over its failure to send relief teams to all regions.
In response, health minister KK Shailaja said that medical facilities might not have reached certain regions due to the magnitude of the crisis. “This is because medical professionals found it difficult to reach the affected areas and by now it has been almost resolved,” the minister said.
She added that medical teams from neighbouring states were on the way.
A group of stranded fishermen who came to help with the rescue work in Alapuzzha from the state capital complained of lack of coordination between authorities. “We rescued several people but now there is no one to help us return to where we came from with our boats. We risked our lives in the rescue work but now there’s no help for us,” the group said, according to PTI.
No heavy rain in next 5 days
The NDMA on Sunday said there will be no heavy rains in the flood-hit Kerala for the next four days, giving a ray of hope to the distraught people of the state.
“Rainfall will further decrease during the next five days. Heavy rain at one or two places in Idukki, Konnur and Kozhikode districts likely today. No heavy rain from tomorrow for the next four days,” the NDMA said quoting a bulletin of the India Meteorological Department (IMD).
There is no red or amber colour code warning for any district of Kerala Sunday. A yellow warning has been issued in three districts.
The IMD has four colour codes to signify the intensity of weather. Red means authorities need to take action and one could expect extreme weather conditions, amber means government agencies need to be prepared to handle exigencies. Yellow colour code means situation needs to be watched, while green signals the weather would be normal. (Agencies)