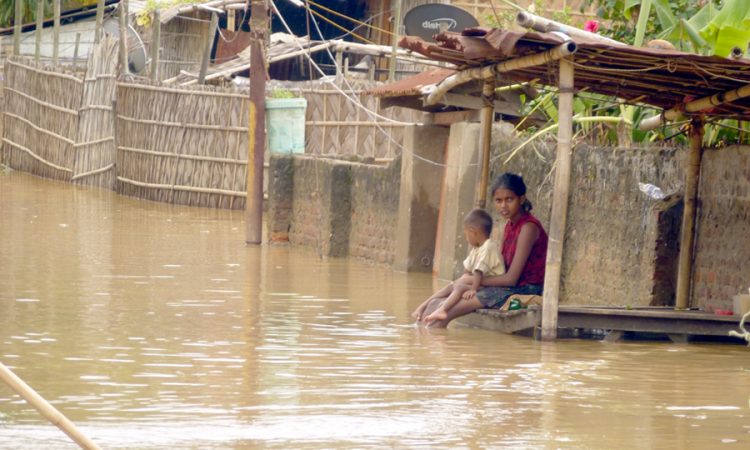 Dimapur, August 1: While the state capital and other districts have witnessed several landslides damaging roads and dwellings of several people, Dimapur district has experienced flash floods due to heavy rainfall on Tuesday and Wednesday evening.
The artificial floods have forced hundreds of people out of their homes as rain waters have entered their homes. This situation in Dimapur is not something new as it happens every year as there are no proper water outlets to tackle heavy rainfall.
Most of the nullahs and water outlets have been blocked due to dumping of garbage or are encroached upon for construction of building leaving only a narrow passage for water flow. The issue has been raised every year for the last more than a decade but nothing has been done to clear the encroachments or clear up the garbage.
The worst affected areas are SM Colony, Zeliangrong Colony, Dhobinullah, Super Market, Nagarjan, Riverbelt colony, Burma Camp and several other low lying areas, which are inundated after the heavy showers.
On Wednesday morning, flood water levels in many colonies were such that people were forced to remain indoors. And when the water receded in the evening, another downpour in the evening worsened the situation.
As per reports, Police Colony was worst affected forcing people to take shelter elsewhere.
People of Chungaizeng and Ragailong colonies at Burma Camp were also affected by the floods.
The bus depot behind Super Market was submerged with water even entering the bus counters and residence of many people. No bus could operate on Wednesday from there today.
The Fisheries Department at Nagarjan also experienced rise in water levels in their ponds and even water overflowing the roads.
On a lighter note, people were out with fishing nets at various places to catch aquatic craniate animals as Dimapur has been facing scarcity of the same due to ban imposed on fish brought from outside the state.
With torrential rains continuing in Nagaland, people need to be prepared to face any eventuality in Dimapur and elsewhere and remain always alert.
(Page News Service)