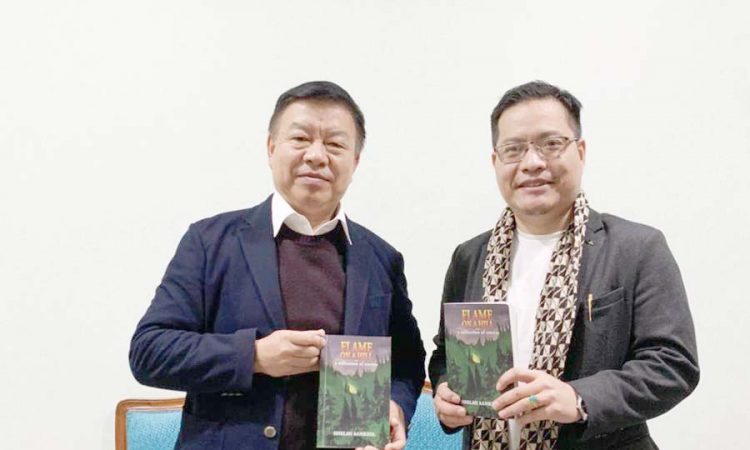 Dimapur, January 24: The Naga Scholars’ Association (NSA) in collaboration with Bibliophile South Asia organized a book release titled ‘Flame on a fire: A collection of stories’ by Shelmi Sankhil on January 23. The book was released by Dr Lorho S. Pfoze, sitting Member of Parliament in the Lok Sabha for Outer Constituency, Manipur.

The author of the book Shelmi Sankhil stated that the book is a collection of stories clubbed into three categories with overlaps. Some of the stories are based on specific moments in the history of the Lamkang people. Starting with the historical event of the third century Common Era, when a Lamkang village was razed to the ground by Leiya Punsiba, the then king of the Moirang kingdom, the historical arc of the stories in this category includes later encounters with the unified kingdom of Manipur (1570 CE), the British in the early nineteenth century, and the Japanese during World War 2.
The second category of the book is a set of stories that is categorized as memoir. Some of them recount the author’s encounters with military excesses in Manipur at a given time, while others recount notable experiences of select individuals that were narrated to a living audience. The third category is the short stories. What separates the stories in this category from those in the first two, though all can be labeled as ‘short story’, is that they are entirely fictional in both their conception and treatment.
Shelmi further stated that although the tribe of principal focus in this collection is Lamkang tribe, these stories can be taken as representing the people of Chandel. The shared cultural heritage and overlapping territories of the tribes of Chandel allow for that extension, said Shelmi.
The event moderated by Senganglu Thaimei, Assistant Professor of English, Miranda House, had speeches from Dr Pfoze and Ashok Butani, the publisher, before the author read a few passages from the book.
In his welcome note, Dr. Zuchamo Yanthan, the president of the NSA, emphasized the importance of the book for understanding one of the least understood Naga communities in Manipur, and congratulated the author for writing a book that will not only introduce the historical experiences of the Lamkang people, but also of the Chandel Naga tribes as a whole.
(Page News Service)