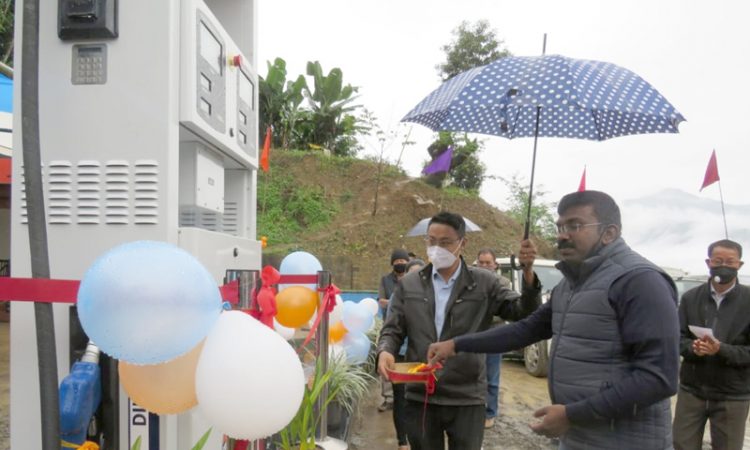 Dimapur, October 24: The first India Oil Corporation Ltd filling station at Noklak was inaugurated today by Deputy Commissioner Noklak, Reny Wilfred. The petrol pump is located at Pangsha road, below Nokyan village.
Speaking on the occasion as guest of honour, Reny Wilfred stated that Noklak filling station of Indian Oil Corporation Ltd is the first milestone achieved after the formation of district. Till date, all customers have been dependent on private sector of petrol and diesel where the district administration have not been in a position to effectively control over the private parties with frequent shortage situations, he stated.
The DC expressed his appreciation to NGOs and civil organization for their support and hoped that the Indian Oil Corporation Ltd will be flourishing in Noklak district.
He expressed his concern that the road connectivity from Chendang Saddle to Noklak Hq and from Noklak to various administrative circles specifically Thonoknyu should be the next milestone.
He said initiatives have already begun to get special provision to ensure good road where landslide can be cleared at the earlier stage. He hoped that with the support of public, public leaders and elective representatives, connectivity which is an all-weather road should be made available in the district.
When there is better road connectivity, price of essential commodities will be low, he added.
Proprietor of Noklak Filling Station H.Thangsoi, President, Khiamniungan Tribal Council, Ngon and President, Thang Range Public Organization, Hangthing also spoke during the occasion.
Dedicatory prayer of Noklak Filling Station of Indian Oil Corporation Ltd was led by Pastor, Longdon Baptist Church Rev. B.Chillia.
The programme was chaired by P.Khumo and was attended by SDO (C) C. Phuniang, EAC, KTC, KSU, KMH, TRPO, DBs & GBs and various representatives from different societies of Noklak Town and neighboring villages. (Page News Service)