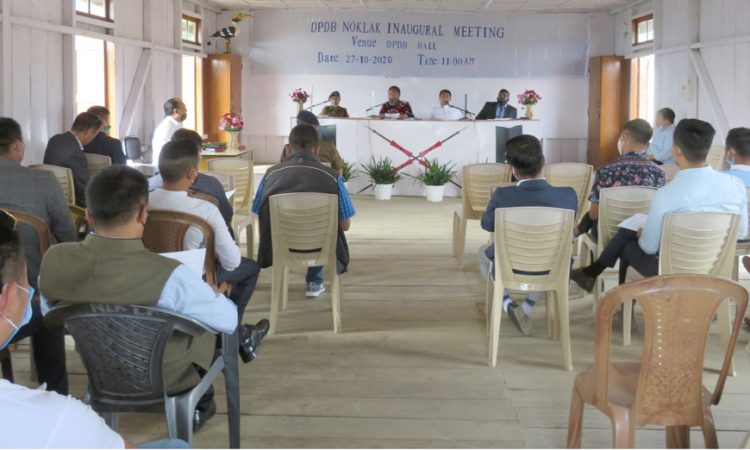 Dimapur, October 28: The first meeting of Noklak District Planning and Development Board was held on October 27 at DC Conference Hall, Noklak under the chairmanship of DPDB Noklak Chairman & Advisor, Prisons and Printing & Stationery, H Haiying in the presence of L Khumo, Advisor, Fisheries and Aquatic Resources, Economics & Statistics and Evaluation.
Advisor & Chairman DPDB Noklak, H Haiying welcomed all to the first DPDB meeting. He called upon the members to have a positive mindset for the developments of the district and mentioned that strict attendance should be maintained. To make Noklak district better, he said, it is the responsibility of the officers in the departments for bringing all round development and urged them to be in station. He sought co-operation from all the members to work seriously for the upliftment of the district.
Advisor LKhumo stated that DPDB is a platform to bring the problems and issues of the respective departments and to discuss and debate all developmental activities. He encouraged the members to endeavour whole heartedly in their duties.
Vice Chairman DPDB & DC Noklak, Reny Wilfred, IAS stated that a well formulated vision and good initiatives for the new district are expected from all for the progress of the district. For nurturing such good initiatives, the presence of the officers in the district is compulsory.
Developmental activities can be implemented in its true sense only with the support of all the departments, he added.
He also mentioned that, there are two types of developments, one is a long term plans or more in line with vision and the other one is short term and medium term ones. And to this, we will be approaching both in the course of time, he mentioned.
Every department is having their own set of troubles like shortage of man power but they have to remember that they have HODs in every department where it can be sort it out, and whose presence is mandated in important meetings without fail, for apt coordination, he added.
SP Noklak, Dr. Pritpal Kaur, IPS also called for united effort for the upliftment of the district.
The meeting tabled Master Plan for Development of the District, a comprehensive document with more than 600 plus big and small proposals covering all the administrative circles under the district, categorized according to the departments. The plan was prepared by District administration in coordination with Tribal Bodies and Public Organization, and was submitted to DPDB for addition and modifications through respective departments.
The board decided to reconsider and reallocate LADP funds for the current year to give impetus to the district upgradation related priorities.
The house discussed on the functioning of departments from Noklak focusing on operationalization of Noklak Departmental Offices, allocation of Office space for Departments and submission regarding manpower required by various departments. Improvement of basic amenities in the district with preparation on comprehensive plan on Jal Jeevan Mission, Power Connectivity for all, Town road upgradation was also discussed.
The Board decided to prioritize the NREGA projects for the Year 2021-22 to ensure rural road improvements. R&B department was given the mandate to prepare a project for prevention of road deterioration through priority installation of hume pipes and culverts.
On banking sector, the house discussed and felt the needs for Enhancement of banking services and DLCC formation, Treasury and Currency Chest at Noklak, Bank account for all families, increasing the sanctioned strength of PMEGP and SEP beneficiaries to promote livelihood and self-employment.
With regard to the land acquisition, Land Acquisition for Town expansion, Land Patta issues in the Hqs. Land for District Hospital and Land for Police Reserve were discussed and approved to constitute DLLA committee.
The agenda on Improving Postal facility, Establishing EBRC at Thonoknyu, SANKALP Skill development project, NIRBHAYA special project on Safety and Security of Women, FCI godown at Noklak and Departmental stores at Noklak, Panso and Thonoknyu Hq, Proposal for Jawahar Navodaya Vidyalayas, proposals for improving health facilities in District, Proposal for establishment of Official club and Badminton Court and Inclusion of Noklak into IFAD Project and Society registrations were discussed and approved for follow up action to be taken with the concerned authority and the government.
The house deliberated on proposals to be undertaken by various departments as part of their routine activities and approved on the list of projects and proposals expected from various departments in the subsequent DPDB meetings.
In regard to Biodiversity Documentation, Community Reserves, Heritage bio-diversity area And Village Bio-diversity register were discussed thoroughly and requested the concerned department for necessary initiatives. KVK and NABARD were identified for proposing a comprehensive agricultural development plan for the district for rural rejuvenation.
To redress the connectivity issues the board approved the proposal for Inclusion of Chendang Saddle to ITC Dan (Pangsha) Road under NH and Proposal for GB’s and DB’s Court Construction at Noklak Hq and also the proposal to request NSDMA for JCBs for addressing the frequent road clearance necessary due to landslides. During the meeting, the house approved a proposal to request the government for provision of an ambulance for Red Cross Society, Noklak.
Regarding Town expansion the board decided to propose for projects under Urban Development and Municipal Affairs, and to write to Department of Municipal Affairs for assistance in Town Planning for a Green Field Township. The house also approved and recommended to the Government for up gradation of Thonoknyu SDO Civil Hq. to ADC Hq.
DC Noklak appraised the house on Ground Truth Surveys and tabled reports on Mithun rearing, Differently abled persons, Elderly and Widows, Road connectivity, Aadhaar and Financial Inclusion, Drinking Water Facilities, Streets lighting, Agriculture Productivity, village level libraries, mobile connectivity and human resources Pool of all the villages under Noklak district. And to this, DC requested the respective Department to verify the Survey Results and submit verification report at the earliest along with proposals for redressing the gaps highlighted in survey reports.
(Page News Service)