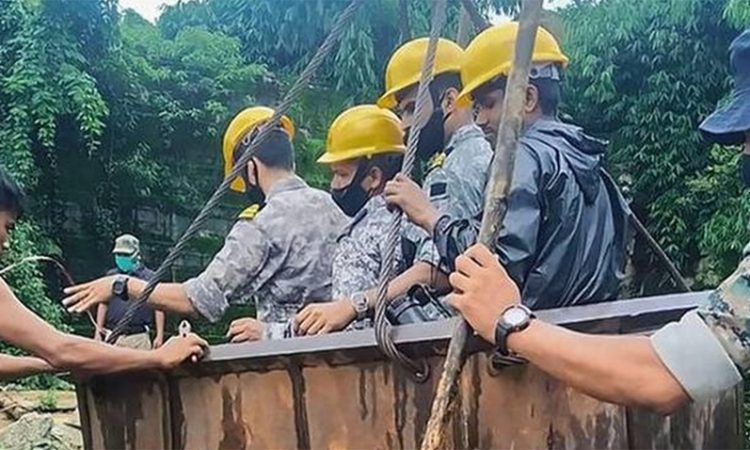 Shillong, June 16: A body was retrieved on Wednesday afternoon from the flooded coal pit in Meghalaya’s East Jaintia Hills district where five miners were trapped since May 30, an official said.
The body was retrieved from the bottom of the 152- meter-deep pit by divers of the Indian Navy and NDRF, the district’s Deputy Commissioner E Kharmalki told PTI.

It is yet to be identified but suspected to be of one of the trapped miners, he said.
The Navy on Tuesday detected two objects, which they suspected to be as bodies of the miners, he said.
The operation to retrieve the second “suspicious object” was called off as the visibility in the water was affected during the retrieval of the first body, the official said.
“They are expected to resume the retrieval of the second suspected body on Thursday when the visibility under water improves,” he said.
The water level in the pit also rose considerably as there was heavy overnight rainfall in the area, he said.
Ten high-powered pumps have been deployed to dewater the main shaft and a nearby shaft that are connected underneath at the seams, Kharmalki said.
A team of 13 personnel of the Navy last week joined the rescue teams of NDRF, SDRF and the Fire Services deployed at the accident site since May 30.
The Navy brought with them their ROV — an unmanned search vehicle deployed in the deep waters. The ROV had in 2019 retrieved three bodies of the 15 miners trapped deep inside another flooded coal mine, located about 20 km further at Lumthari.
At the illegal mine in Umpleng, four of those trapped are from Assam and one is from Tripura.
Six others, who narrowly escaped the onrush of the water during a dynamite explosion deep inside, were sent to their homes in Assam, Kharmalki said.
Dynamite was used to break the coal seams, which accidentally either hit a water body or another nearby flooded mine, inundating the mine and trapping the five miners, officials said.
The National Green Tribunal (NGT) had banned the hazardous rat-hole coal mining and transportation of coal in Meghalaya in 2014.
The rat-holes are dug horizontally across the coal seams. To reach the coal seams, coal miners dig deep vertical shafts to take out the coal to the top of the surface.

The district police have arrested Shining Langstang, the mine owner, and charged him with violation of the NGT order.
The ‘Sordar’ (mine manager) is on the run and a lookout notice has been issued since he was the one who brought migrant workers from Assam and Tripura to work in the illegal mine, a senior police officer said.
Based on the account of the survivors, an FIR was registered. (PTI)