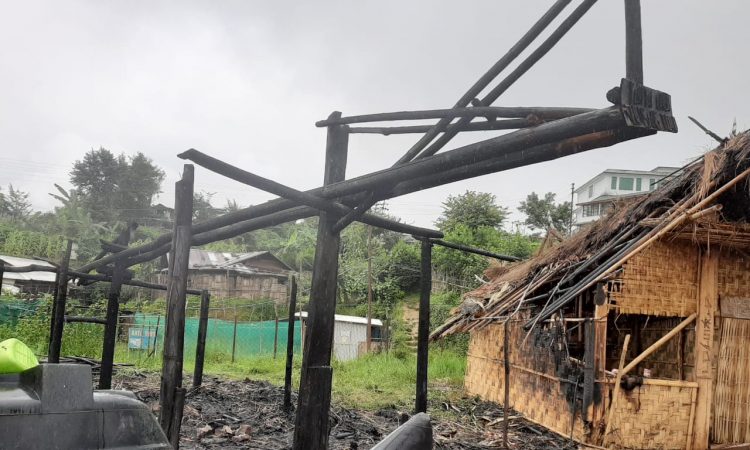 Tuensang, July 6: In an unfortunate incident, one Morung was burnt down and two others were partially burnt at the Loyem Memorial Ground, Tuensang Town this morning. These Morungs were permanent structures constructed by the Chang community and villages to commemorate their festival Poanglüm earlier this year.

The Chang apex bodies had temporarily lent these Morungs to be utilized as kitchens for Quarantine Centres in and around Tuensang Town during the period of the pandemic.

Today’s in-charge for cooking, the Tuensang Town Baptist Lashong (TTBL) had already sent lunch to the Centres before the fire broke out. According to TTBL Pastor, Rev. Sangkap the cause of the fire is unknown. “We don’t know exactly how the fire started”, he said, adding when they realized the mishap, “the roof was already on fire. We don’t know if it was the fireplace or a short circuit.”

Rev. Sangkap, however, expressed relief at having the Fire Brigade not far from the venue.

The three Morungs that were affected by the fire belonged to Yunyu Union Tuensang, Khudei Union Tuensang and Nakshou Union, Tuensang.

On receiving the fire call at around 11 a.m. today, Fire and Emergency Services (F&ES) mobilized three Fire Tenders along with sufficient equipments and Fire personnel to bring the fire under control.

According to F&ES, Tuensang, the cause of the fire was due to electrical short circuit.

Property worth around Rs 5 lakhs was destroyed in the inferno.