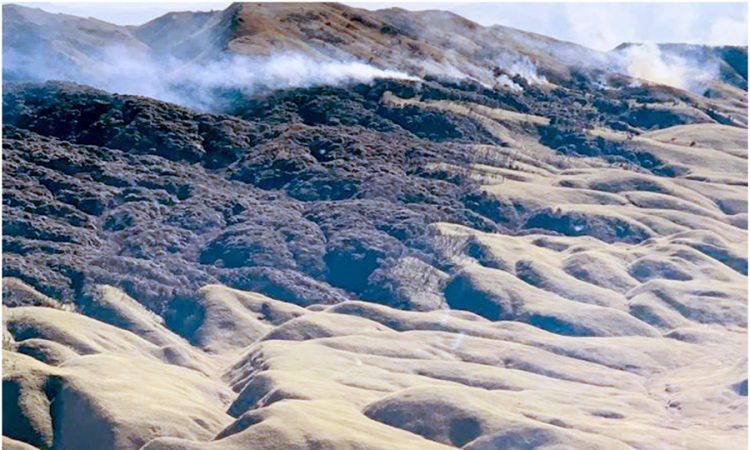 Our Correspondent
KOHIMA, JANUARY 3: Around 10 square kilometres of Dzukou range has been razed by wildfire that broke out on December 29.

Briefing media persons on the 6th day of the fire at Viswema village, President of Southern Angami Youth Organization (SAYO) Zakieletuo Tsükrü said as per the latest communication from volunteers who are up at Dzukou valley the inferno, which was in the Southern range till Saturday, is slowly spreading down towards the western side of the valley.
“The fire is spreading in a south-west direction as of now and if it continues for the next two days in that direction then it will reach the Zeliang-Angami border”, he said.
Narrating the incident since the fire was first reported on December 29, he said, “We detected the fire at Dzukou halfway during the afternoon hours on December 29. It was reported that some people have trespassed into the Dzukou valley from Kezotsa after which the wildfire was reported, as reported by the caretakers of the valley.”
“On receiving the information, we dispatched SAYO volunteers to intercept those trekkers while 21 of them were initially reported to be spotted by the villagers. However, the volunteers could not intercept anyone,” he said.
“Our suspicion is that the trekkers have fled towards the Kezotsa in Manipur side,” he said.
On December 30, the Governor of Nagaland had plans to visit and so SAYO volunteers were mobilized to make necessary arrangements for the trip as they did not want the Governor to cancel his visit. “Therefore, we mobilized volunteers early in the morning to assess the ground situation”, Tsükrü said. The same day, the Administration, Police, Forest Department, SAPO and SAYO also went to the valley for review and to take stock of the fire situation. The fire had spread to more than 2 kms by then, he said.
Subsequently, 200 SAYO volunteers and 82 personnel of the NSDMA, DEF Kohima, 4th NAP Thizama and Forest Department were pressed into action on December 31. The same batch of volunteers carried on the effort till January 1, he informed.
Personnel of the NDRF were also roped in to combat the spread of the fire on January 2 and the focus now is on fire line cutting exercise along the stretch of the river, which was conducted from December 31, 2020.
Also recalling the November 26, 2018 incident when the valley caught fire due to carelessness of some trekkers, SAYO president stated that after the 2018 wildfire an MoU was signed between the state of Manipur and Nagaland to utilize only two routes from both the states not trespassing any other route to the valley.
The SAYO urged the people visiting the valley to be more careful and follow all necessary instructions printed on the tickets issued by SAYO.
Advisor to Chief Minister of Nagaland, Medo Yhokha, along with DC and SP, Kohima, also inspected the site on January 2.
Yhokha recommended setting up of a core team to coordinate between different local agencies and governmental agencies.
Meanwhile, District Forest Officer (DFO), Kohima, Rajkumar M said that today ground operations were carried out by Nagaland Police, Forest, NDRF, SDRF and SAYO volunteers. SDO (C) Jakhama, SDPO South and Range Forest Officer, Kohima, are coordinating the ground operations, he informed.
To maintain seamless communication with the ground operation team, Kohima police has also set up a control room at Dzukou entry point at Viswema village and two relay stations are also set up in a resting shed and in the Dzuku base camp, he said.
He informed that Kohima Forest Division and SAYO volunteers had already cut a 5km fire line on December 31 while another 2 km fire line was cut by SAYO volunteers on January 1. This was done to prevent the spread of fire to the valley, he said, adding that they were assisted by Kohima Police and State Disaster Response Force.
Reiterating that the fire is under control and big team work is happening to prevent the spread of fire to the valley, Rajkumar said IAF choppers have dropped 24,000 litres of water with 12 shuttles.
The present situation is under control as per pilots, the DFO said.

80-90% of Dzukou fire controlled: NSDMA
The raging Dzukou range fire in Kohima district has been controlled to a great extent, said official sources.
Informing this Officer on Special Duty (OSD) NSDMA Johnny Ruangmei said this was found during the damage assessment of Dzukou valley forest fire conducted by IAF and NSDMA yesterday.
He said as per the assessment the forest fires have been controlled up to 80 to 90.
He, however, said that the operation may continue tomorrow to douse some of the minor fires on the hillocks.
He said the Dzukou valley portion is safe as witnessed from the aerial survey. He thanked IAF and other stakeholders such as paramilitary, National Disaster Response Force (DRF), State DRF, Home Guard and Civil Defence, Police, Southern Angami Youth Organisation, Fire & Emergency Services, District Disaster Management Authority of Kohima and Dimapur.