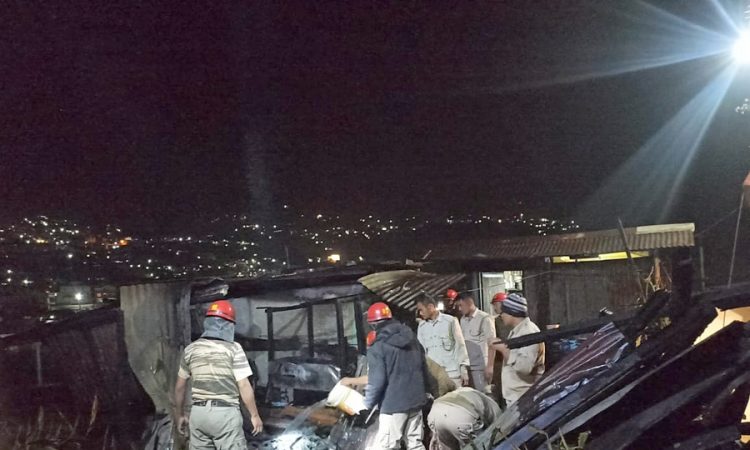 KOHIMA, JANUARY 13: Residents of Officers’ Hill Colony in Kohima were jolted awake by the sound of 4 LPG cylinders exploding from the storeroom of a house that caught fire at around 1 am in the morning of January 13.

“My husband was away in Dimapur and it was just my two daughters, our two tenants and I when it happened,” said the wife of the family whose storeroom was engulfed by the fire.
The wife said she remember going to bed at around 12:30 in the morning and the next thing she heard was an ‘earth shattering sound’.
“At first, I thought that it was an earthquake, so I immediately went to wake up my two daughters,” she shared.
“Fortunately, we had a couple of water tanks on our terrace overlooking the storeroom that was on fire, so we brought the fire under control with the help of our neighbours,” she added.
While the cause of the fire is yet to be ascertained, property worth Rs. 1.6 lakh was damaged but there were no casualties or any injuries, said Lhouleibeizo Angami Officer-in-charge of Fire Station Kohima (South).
Angami said they received a call about the fire at 1:04 am and fire fighters reached the spot at 1:15 am. (Page News Service)