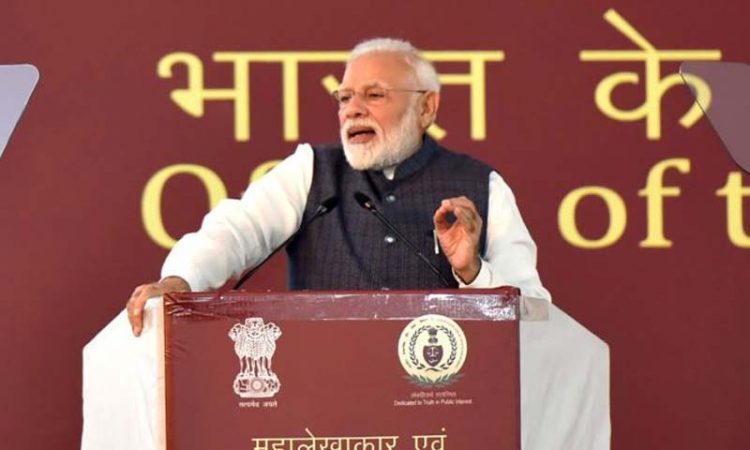 New Delhi, November 21: Prime Minister Narendra Modi on Thursday exhorted auditors to develop technical tools to check frauds and improve efficiency in government departments as well as play a role in making India a USD 5-trillion economy.
Modi also emphasised that the government wants to move to evidence-backed policy making by 2022 and the the Comptroller of Auditor General (CAG) can contribute as a think tank by focusing on big data analysis.
“We must challenge the frauds. Both internal and external auditors need to find innovative methods to catch frauds. We must need to encourage the core values of auditors for the same,” Modi said while addressing a conclave of the CAG on transforming audit and assurance in a digital world.
He said a lot of attempts have been made in the last few years to control frauds in governmental organisations.
Stressing the need to make evidence-based policy formulation an integral part of governance, the prime minister said auditors must resort to technical tools to iron out any chances of fraud in organisations and give a new identity to new India.
Modi, who addressed the CAG conclave for the second time since 2016, said India is moving towards a USD 5-trillion economy target and “you (auditors) have a big role in the same. Whatever you will do directly affect our policy making, efficiency, decision-making, business, investment, ease of doing business and more”.
He also asked the CAG to think from the perspective of a think tank and not just from a point of view of an auditor whose job is to find faults.
Digital audit and digital governance can strengthen institutional memory for several organisations, he said adding that audit firms around the globe are moving towards crowd-based solutions.
The CAG should also adopt the best global practices and instill them into the Indian system, while working on the country-specific tools.
“CAG audits several international organisations and provides technical support to other countries as well. You can start an organisational mechanism through which the teams that audit such firms can share their experiences and share best practices in those countries/organisations,” the prime minister said.
In order to improve efficiency and transparency, Modi said the auditors should organise a hackathon that will help find solutions to many issues being faced.
The apex auditor should also focus on process audit for better efficiency, he said adding that the CAG must come forward as a catalyst for good governance and not restrict itself to statistics and steps.
“You are working towards converting CAG to CAG+, and this has helped the nation as well,” he said while appreciating the new initiatives taken by the government auditor.
Earlier, Modi unveiled a statue of Mahatma Gandhi in the CAG complex.
CAG Rajiv Mehrishi gave a detailed presentation on the new initiatives being taken by the apex auditor and also highlighted various problems, like non-availability of seamless data, being faced them.
He also suggested that the government should enact a legislation — ‘DATA’ – Data Accountability and Transparency Act — for improving the quality and availability of data. (PTI)