Says ‘no nation is free from the burdens of a deficit economy’
Dimapur, June 19: The ruling NDPP in Nagaland has reacted strongly to the NPCC statement attacking the State Chief Minister, who also holds the finance portfolio, for presenting the current financial position of the State Government to the people.
In a statement, the NDPP media & communication committee said the Chief Minister is discharging his duties and responsibilities by regularly bringing to the attention of the people the financial condition, adding the action of the CM only displays “his sincerity in running a transparent Government accountable to the people with the belief that the people of the State have the right to know the current financial position of the government they have mandated apart from all other government related activities.”
In the statement, the NDPP claimed that no nation is free from the burdens of a deficit economy, not even the world’s leading economy, the United States. “India herself faces the problems of having a deficit economy which the NPCC should know better than anyone as their party has led the Nation for so many years in the past,” it said.
Stating that taking the COVID-19 crisis to attack the Chief Minister on the States deficit and economy “is nothing less than hitting below the belt when the entire State machinery is tirelessly fighting this global pandemic on a war footing,” the NDPP said, “Today, the NPCC, having not even a single elected representative in the Assembly, is trying to preach to those who are actually working for the welfare and uplift of the people and the economy of the State. It is not too long ago when the State under the leadership of the NPCC was reeling in rampant corruption with the economy in doldrums. The NPCC should think twice before pointing fingers at others.”
Rather the NDPP claimed that the State Government should in fact be commended for trying its best to provide maximum with the minimum it has at its disposal. “It is a well-known fact that 70% of the State’s finances goes into the paying of salaries and pensions. Nagaland is a salaried economy without having much source of income to supplement the huge percentage of funds going to its employees. Any government would struggle to bring development with the meagre 30% of the funds available after the disbursement of salaries and pensions. However, the NDPP led PDA Government is working to its best to provide the needs of the people. The vast improvement in the roads and other infrastructure are testaments of the commitment of the government of the day to work for the people,” it claimed.
The NDPP also hit out at NPCC president K Therie, who it alleged has a history of its own. “Mr. Therie was dropped from the Congress Ministry in 2002 as a Cabinet Minister for his non-performance and misappropriations and was later even expelled from the Congress party for anti-party activities. He then joined the regional party and became finance minister under Mr. Rio. But history repeated itself when circumstances compelled the Chief Minister to drop him from the council of ministers for his non-performance and misappropriations,” it said.
The NDPP alleged that it was under Therie’s stewardship as finance minister when the Nagaland Government was given a generous grant of Rs 365 crores to wipe out the accumulated deficit carried over from the Congress ministry in 2003, by the then Union Government. “His handling of this grant and his management of the state’s finances was outrightly rejected by the then opposition Congress who had demanded a white paper on the 365 crores. Mr. Therie’s tabling of the white paper was again rejected by the Congress and till today his own party has refused to accept Mr. Therie’s explanation. Subsequently he was dropped from the ministry and later pulled up for anti-party activities. Now the he has come full circle with his return to the Congress and his leadership has landed this grand old party with a zero account in the Nagaland assembly,” it alleged.
Reminding that members of the COVID working committee are giving daily updates on the status of the pandemic in the State, the NDPP said to accuse the Chief Minister for failing to “instill confidence in the people” is nothing but taking cheap pot shots at the Chief Minister “which is unbecoming of a political party in the stature of the NPCC”.
“The NPCC should therefore refrain from taking advantage of the current global pandemic by making personalized attacks on the Hon’ble Chief Minister and the Government,” it added. (Page News Service) 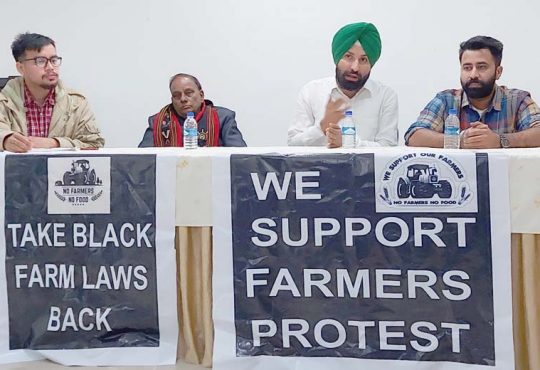 Punjab farmers on tour to create awareness on farm laws