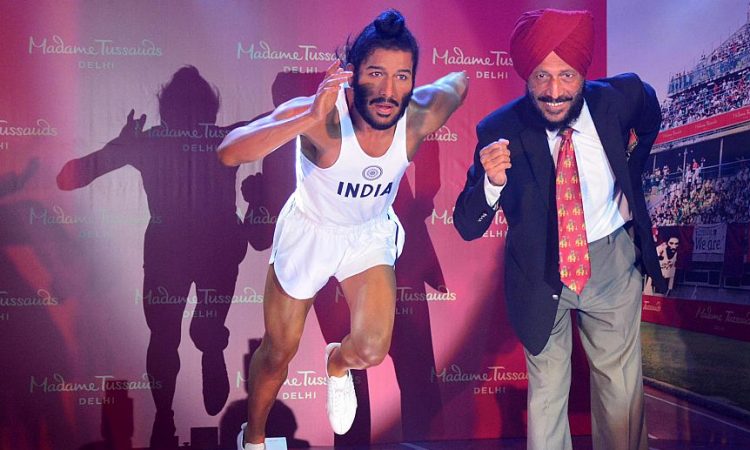 Megastar Amitabh Bachchan, Mohanlal, superstar Shah Rukh Khan, Akshay Kumar, Ajay Devgn, actor-filmmaker Farhan Akhtar and others from the Indian film industry mourned the end of an era as they paid tributes to sprint icon Milkha Singh, describing him as an epitome of “hard work” and “determination”.

Singh, 91, died on late Friday night at Chandigarh’s PGIMER hospital after battling COVID-19 for a month.
He passed away less than a week after he lost his wife Nirmal Kaur, a former national volleyball captain, to the same ailment. He is survived by his golfer son Jeev Milkha Singh and three daughters.
“In grief… Milkha Singh passes away… the pride of India… a great athlete… a greater human,” Bachchan wrote on Twitter on Saturday morning.
Khan said Singh was an inspiration to millions of people including him.
“‘The Flying Sikh’ may no longer be with us in person but his presence will always be felt and his legacy will remain unmatched… An inspiration to me… an inspiration to millions. Rest in Peace Milkha Singh sir,” he wrote.
In a statement posted on his various social media accounts, Akhtar, who spent a lot of time and got to know Singh personally while playing the lead role in the 2013 biopic “Bhaag Milkha Bhaag”, said he is unable to come to terms with the sports icon’s demise.
“A part of me is still refusing to accept that you are no more. Maybe it’s the stubborn side I inherited from you…the side that when it sets it’s mind on something, just never gives up. And the truth is that you will always be alive,” he said.
The 47-year-old actor described Singh as a large-hearted, down to earth man, who showed how with hard work, honesty and determination one can touch the sky.
“You represented an idea. You represented a dream. You represented (to use your own words) how hard work, honesty and determination can lift a person off his knees and get him to touch the sky. For those who knew you as a father and a friend, it was a blessing. For those who didn’t as a constant source of inspiration and a reminder of humility in success,” he added.
Filmmaker Rakeysh Omprakash Mehra, who directed the film, said Singh’s “grit”, “grace” and “gentleness” have enriched life of millions across the globe.
“I am so fortunate to have met you and Nimmi aunty, who showered me with her love like a mother. Thank you for empowering us in telling your story to the world,” he said.
Kumar, who was offered to star in the biopic prior to Akhtar, said he will regret not saying yes to the film.
“Incredibly sad to hear about the demise of #MilkhaSingh ji. The one character I forever regret not playing on-screen! May you have a golden run in heaven, Flying Sikh,” Kumar wrote.
Mohanlal said Singh was not only a great athlete but an equally good human being.
“A great athlete and a great human. Milkha Singhji, you were an inspiration to many! Rest in Peace #MilkhaSingh,” he said.
Superstar Salman Khan tweeted, “You will always be an inspiration… RIP.”
Calling him a “real hero”, veteran actor Dharmendra said Singh will always be remembered with great love and respect.
“The real hero, Milkha Singh THE GREAT you have left us forever !!! We salute you, Son of Mother India you will always be remembered with great love and respect. May your soul Rest In Peace,” he said in a tweet.
Recalling her first meeting with Singh, actor Priyanka Chopra Jonas said she was touched by his humility.
“Warm and welcoming, you made our first meeting so so special. I have been inspired by your excellence, touched by your humility, influenced by your contribution to our country Sending love and prayers to the family. #MilkhaSingh,” Chopra Jonas posted on the microblogging site.
Superstar Ajay Devgn said he will forever be a fan of the sports icon.
“I’ve always been & forever will be a fan of Milkha Singhji, who in his lifetime sped like the wind. Stories of the Flying Sikh are a part of Indian folklore. What a monumental loss. RIP,” he wrote.
Lyricist and CBFC chief Prasoon Joshi said it was an honour for him to write for Singh’s biopic “Bhaag Milkha Bhaag”.
“A doer an optimist whose positivity will always resonate with me. Milkha ji was an inspiration for not only the film I wrote but in life. He didn’t run away from the difficulties and rather he had race with it,” he said.
Anil Kapoor remembered visiting Singh’s house with the other cast members of film “Dil Dhadakne Do”.
“He truly was an incredible sportsman, phenomenal host and above all an amazing human being… will be truly & deeply missed,” Kapoor wrote.
Actor Divya Dutta, who played the role of Singh’s sister in Mehra’s film, said it was heartwarming to see the love and respect he had for his sistar Ishvar Kaur.
Dutta said during the premiere of the movie, Singh was emotional and elated.
“When we met him for the premiere of the movie, I was sitting right next to him infact I have a picture of that and he was so emotional and he was so elated and happy like a child to have seen that film and to see it inspiring so many people,” she said.
Actor-politician Sunny Deol said people will continue to seek inspiration from Singh’s life.
“The nation will remember you & seek inspiration from your life forever. #MilkhaSingh #RIPMilkhaSingh,” Deol said. (PTI)