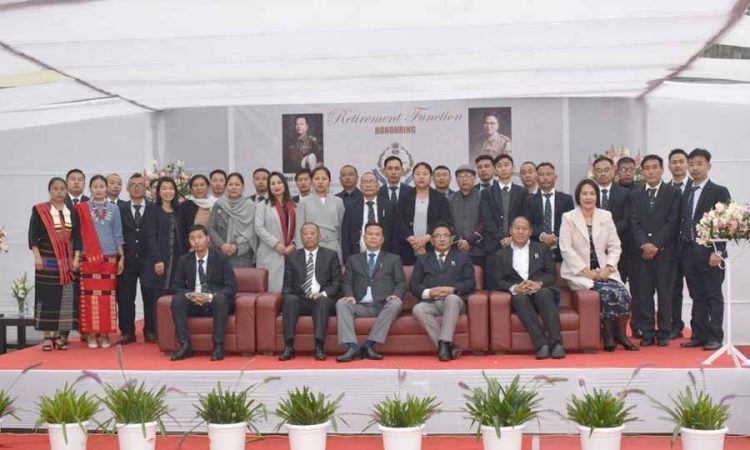 Dimapur, February 26: Retiring IGP & Director of Nagaland Lokayukta, I Meyionen today stated that “as long a power is in the hand of few, corruption is here to stay” in Nagaland.

Speaking at his farewell programme today at the Nagaland Lokayukta Kohima on Friday, the retiring officer maintained that unless there is a political will to fight corruption in Nagaland there will be no accountability, transparency, delegation and decentralization of responsibility in the system.
Encouraging the officers and staff of Nagaland Lokayukta not to lose hope but fight relentlessly the menace of corruption in the society, he said the responsibility of fighting corruption is in the shoulder of the officers of the department and urged all to never lose sight of the assigned duties and responsibilities and to always function as a team.
Recalling the formative years of his career, Meyionen said it was full of enthusiasm and commitment not realizing that in the system all decisions are taken at the higher level and many a times ending with disappointments. He added that landing in such a department is not an enviable job unless one is fully committed.
A DIPR report said the retiring officer also cautioned officers of the high chances of being subjective in their approach during investigations rather than being objective, and sought a balanced approach to achieve the desired results while performing one’s duty.
Meyionen also remarked that in his entire 35 years service career he was never hospitalized nor availed a single penny in medical reimbursement. He acknowledged retired seniors officers for their immense contributions in moulding his career.
Another retiring officer, Sr SP, L Temsunungsang lauded the officers and staffs for their continued support and cooperation during his entire career. He requested the officers in the investigation wing to prioritize and focus while discharging their duties. He also encouraged the officers to keep the love of God, family, work and to cherish others and one self.
Nagaland Upa-Lokayukta, Mayang Lima in his short speech said the retiring officers have come up from certain rank to the highest level through dedication, hard work and sheer determination. Lauding the retiring officers for rendering their best service to the organization he said the legacy and inspiration they are leaving behind will be remembered and will guide the officers and staffs of the department in days to come.