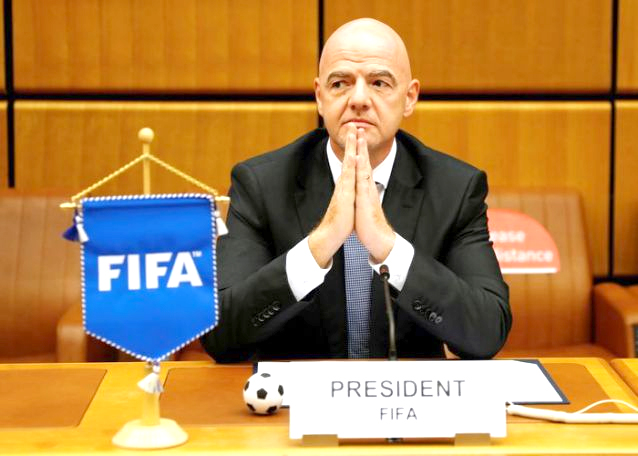 BERN, September 19: The successive postponements to 2022 World Cup qualifiers caused by the COVID-19 pandemic are becoming a real problem and a shortening of the format could be a possibility in some cases, FIFA president Gianni Infantino said on Friday.
The South American qualifiers, due to start in March, will not get underway until next month, while the start of the CONCACAF tournament, which should have been this month, has been put back until March.
Meanwhile, six match days have been postponed in the marathon Asian qualifying competition.
“I am concerned and it’s obviously a real problem, especially if the pandemic doesn’t stop or let up, or we don’t start playing in a normal way,” Infantino told reporters following the FIFA Congress. “We are in the hands of the health authorities.”
Infantino said that soccer’s world governing body had opened a extra window for international matches in January 2022 and would look at finding room for more, something which could upset European clubs who would have to release their players.
An alternative could be to play three matches instead of two during an international window, or stage qualifiers in a single venue instead of home or away.
He added that the November/December slot for the 2022 World Cup in Qatar at least gave FIFA some breathing space.
Infantino also made a veiled criticism of Italy’s Serie A, where Juventus have won the title for the last nine seasons, as he suggested that playoff systems could be an alternative to the conventional home-and-away format for national leagues.
“Somebody told me these things sound like the NBA and are not so good for football,” he said.
“But I ask you… do we really think the Italian league has been very exciting in the last nine years? What kind of competition is it where 90% of teams want to finish second?
“It’s not for the FIFA president to say how football should be played… but it’s legitimate to think there are other ways to play competitions. (Reuters)