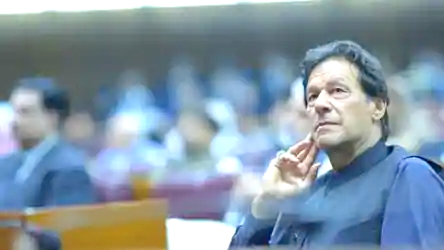 ISLAMABAD, August 28: Pakistan’s Prime Minister Imran Khan has warned that if Pakistan is blacklisted at the FATF or Financial Action Task Force then Pakistan’s economy will be destroyed due to inflation and a massive fall in Pakistani Rupee.
Speaking to a private news channel, Khan said, “If Pakistan is put on FATF’s blacklist, then like Iran, deals will end. No international financial institutions will deal with us.”
Explaining further, Khan said, “It will impact the Pakistani Rupee and when Rupee starts to fall, we do not know how much it will fall. We do not have foreign reserves to save the Rupee. When rupee falls, everything will become costly–electricity, gas and Oil. Once we are on the blacklist, our entire economy will be destroyed due to inflation.”
Pakistan has been on FATF’s grey list for the last 2 years even as it has been given a number of deadlines to full fill its commitments to improve transparency in financial dealings and take action on the financing of terrorism.
Khan blamed India for trying to push his country on the blacklist. He said, “If we go on the blacklist, Pakistan will be destroyed as India has been trying to do. Who is trying to put us on the blacklist? Its India. For 2 years, India has been trying to blacklist Pakistan by lobbying with the international community.”
FATF calls for transparent financial controls so that money is not used for financing of terror or money laundering. The Paris based body will meet in October and on the agenda will be future actions related to Pakistan’s listing.
After last year’s meet, the grouping had called on Pakistan to “demonstrate” effective implementation of financial sanctions against all United Nation’s 1267 committee designated international terrorists among other things. The list includes Pulwama attack mastermind Masood Azhar and 1993 Mumbai blast mastermind Dawood Ibrahim.
According to estimates by the Pakistani government, the FATF grey listing of Pakistan is causing damage of around USD 10 billion annually to the country.
Allowing Nawaz Sharif to leave Pakistan was a mistake: Imran Khan
Prime Minister Imran Khan on Thursday admitted that letting former PM Nawaz Sharif leave the country was a “mistake” by his government.
Citing Khan’s interview with ARY News on Thursday, Dawn reported that the Prime Minister hinted that the government was pressurised into sending Nawaz Sharif abroad, saying that the reports presented to the government suggested that the PML-N supremo was severely ill.
Sharif, who has been convicted for corruption, had left for the UK in November last year for medical treatment.
Khan further said the federal cabinet had held hours of debate over whether the government should let Sharif leave on humanitarian grounds.
He said that the court had declared that the government would be held responsible if anything happens to Sharif. Further, PML-N president Shahbaz Sharif had submitted indemnity bonds worth Rs 7 billion, promising Nawaz Sharif would return to the country, Khan added.
“Now we feel embarrassed. Now he [Nawaz] has started doing politics [from] there as well and, when you see him, it seems like there is nothing [wrong] with him,” Khan was quoted as saying by Dawn.
“We did not give and NRO, we tried our best to do what we could, but the medical opinion presented to us was that if we didn’t do anything, he [Nawaz] could die, that he might not even reach London. This is what we were told and after that we would have been held responsible. So after that we sent him in good faith.”
The Prime Minister said that a “royal” had asked the government to let Sharif leave.
Refusing to take the name of the royal person, he said “they (Sharifs) do have connections abroad”.
“But they (the royal) did not assert it, they said it in a very polite manner. It wasn’t like ‘if you don’t do this, this will happen’.”
However, Imran Khan was quick to add that had the medical opinion not suggested Sharif’s “life in danger” he would not have allowed the former PM to leave the country. (Agencies/ANI)