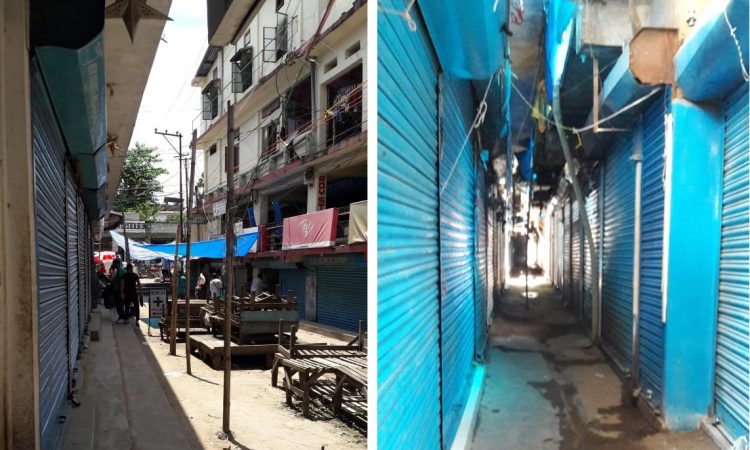 Dimapur, June 23: The fate of two major marketing complexes in Dimapur–New Market and Hongkong Market, still hangs in the balance as no orders have been issued by the state Government for opening these markets. Both the markets were closed down following the detection of a Covid-19 positive case in April and have not been opened since then.
On June 15 last, a meeting of the Dimapur Task Force has suggested measures for opening of these market areas and send their recommendations to the state Government, but till date there is no response. Following the meeting’s recommendations, the Hazi Park Business Welfare Committee had even conducted disinfection drive of the entire market area, hoping that the Government would give a go ahead to open the market at the earliest.
However, what has prevented the state Government from opening these markets in still a mystery, as other marketing complexes, shopping malls and other businesses are doing brisk business after they were allowed to open.
The closure of these markets since the lockdown began has caused immense hardships to the businessmen, as they are left with no option to earn money, even to pay the rent for their shops.
In New Market, closure of grocery shops for more than 2 months has caused damage to essential commodities, while most of the cloth merchants are left without any source of income. While some of the businessmen have managed to sell their products on footpaths in various parts of the town, others who own big shops have no option left.
Abdul Kalon, who worked in a second-hand shop in New Market, told Nagaland Page that almost all the businessmen in New Market are suffering due to the lockdown.
“We used to earn Rs 500 to 600 daily as manual labour in second hand shops, but after a month of lockdown we are subjected to abject poverty with no ration left at home and there is no one whom I can approach for help,” he said adding many of them have not got back to their villages in Assam hoping that they would be able to do good business once the market reopens.
Another businessman said that they are ready to follow the guidelines of COVID-19 while opening their shops, such as maintain social distancing, wearing of masks and keeping hand sanitizers. But until and unless the district administration issues order to open the shops, they cannot do anyting.
Narrating the plight of vegetable vendors of New Market during the lockdown, Santosh Kumar, a vegetable vendor said that since the entire new market was sealed, the daily wage earners were the hardest hit.
“Many of us who own shops inside the New Market have to suffer a lot, as they cannot put up stalls and earn a living,” he said adding later they had to think of setting up stalls on footpaths in residential areas to survive.
A grocery shop owner in New Market, who has been doing business for last 30 years, said that many of the businessmen from North India have left for their home district and that was the best decision for them, otherwise their lives would have been more pathetic, if they had stayed back.
With the current phase of lockdown ending on June 30 next, most the businessmen are hopeful that New Market would be allowed to open for normal business.
The condition of businessmen at Hazi Park (Hongkong Market) is not good either. Most of them owning electronic/mobiles shops and cloths shops have been left without any earning for the past more than two months.
When Nagaland Page tried to speak to them, most of them were reluctant to speak on reopening of the Hongkong Market. However, one of them said the district administration has taken up the matter with the state Government, but it is delayed.
Another elderly businessman, who did not wish to be named said, “We have been without any work since the last more than two months and whatever we had earned earlier has been spent. If we are not able to open our shops, then our lives would be difficult.”
“We will have to face starvation,” he rued and dwelt at length on the difficult living conditions of his family and many others and added that the accumulating rents, besides many other taxes is hounding them giving them nightmares.
A prominent business man of MP road when queried on the opening of the Hongkong market said, “We are waiting for the orders from Chief Secretary”. (Page News Service)