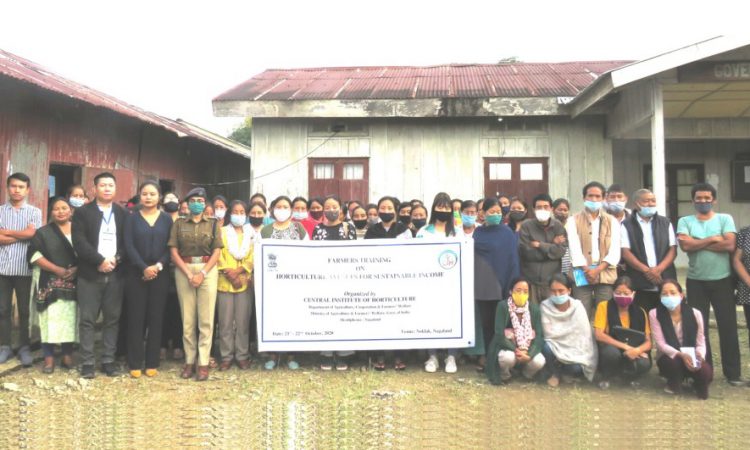 Empowering Self Help Groups, a two-day farmers training on Horticulture avenues for sustainable income was held at GHSS Noklak on October 21 and 22 (IA Noklak)

Dimapur, October 23: A 2-day farmers training on horticulture avenues for sustainable income was held at GHSS Noklak on October 21 & 22.
Deputy Commissioner, Noklak Reny Wilfred IAS expounded on the scope and potential of the agri and allied production in the region and shared on the prospect of market avenues for farmers. He assured that the District administration is in full support too any kind of life changing activities and hoped that the training of farmers and Self Help Groups will start a new method of farming as a means of value addition.
Superintendent of Police, Noklak Dr Pritpal Kaur IPS stated that farmers have to shift from traditional style of farming to a scientific method in order to increase the production and also to enhance quality. Encouraging the SHGs, Dr Pritpal Kaur said farmers are the best person in the world and the backbone of the society. She advised the trainees to learn properly and share with friends and neighbours of whatever they learn during the training.
AHS, Central Institute of Horticulture, Dr Moasosang Longkumer spoke on awareness on horticulture avenues. He stressed on the concept of high density and meadow orchard in guava. This is a shift in farmer’s perception from production to productivity and profitability which can be achieved through high density planting. He also shared on the concept of floriculture and agriculture.
Post harvest technologist, Vinika Aomi explained in detail with hands on training on processing and value addition of horticulture crops on guava juice preparation, jack fruit chips, green chilies pickles and ginger candy. She also imparted knowledge on mushroom cultivation, Kiwi candy and mango pickles. STA, Central Institute of Horticulture, Mhasi demonstrated on nursery raising of onion farming.
The two days programme was organized by Central Institute of Horticulture, Department of Agriculture, Cooperation & Farmers Welfare, Ministry of Agriculture & Farmers Welfare, Government of India, Medziphema under the initiative of Police Department led by Superintendent of Police Noklak, Dr Pritpal Kuar IPS.
Altogether 54 trainees attended the training. (Page News Service)