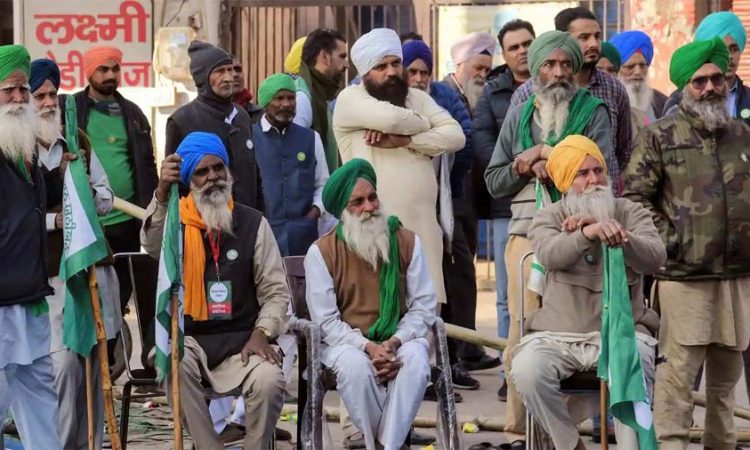 New Delhi, January 21: Protesting farmer unions on Thursday rejected the government’s proposal to suspend three farm laws for 18 months, and said they want nothing but a complete repeal of all these contentious legislations.

“In a full general body meeting of the Samyukt Kisan Morcha today, the proposal put forth by the government yesterday, was rejected. A full repeal of three central farm acts and enacting a legislation for remunerative MSP for all farmers were reiterated as the pending demands of the movement,” Samkyukt Kisan Morcha, an umbrella body of protesting unions, said in a statement.
The government, during their tenth round of negotiation with the agitating farmer leaders on Wednesday, proposed to suspend the three farm laws for 1-1.5 years and set up a joint committee to find an amicable solution in the interest of the farming community.
The two sides had also decided to meet again on Friday after the union leaders told the three Central government ministers that they will hold their own internal consultations on Thursday to decide on the Centre’s new proposal.
During the internal meeting, which lasted for over four hours, the farmers also asserted that they “will not go back to their homes until their demand to repeal the three contentious farm laws is accepted by the government”.
“The SKM pays homage to the 143 farmers who have been martyred in this movement so far. These companions are separated from us while fighting this mass movement. Their sacrifice will not go in vain and we will not go back without the repealing of these farm laws,” the statement said.
However, Jagjit Singh Dalewal of Bharatiya Kisan Union (Sindhupur), one of the 41 union leaders participating in the negotiations with the government, said a final decision is yet to be taken on the government’s proposal and various union leaders were still discussing the matter.
While several other farmer leaders said consultations are over and a final decision has been taken to reject the government’s proposal, indicating that the deadlock over the contentious farm laws may continue.
Meanwhile, the meeting between the protesting unions and police over the January 26 tractor rally remained inconclusive on Thursday as the farmers stuck to their demand to take it out on Delhi’s busy Outer Ring Road.
“In the meeting held with the police officials, police requested farmers to not conduct the parade in Delhi while the farmers restated their plan about doing the parade on the Outer Ring Road of Delhi,” Morcha said in statement.
It stated that this peaceful movement is becoming people’s movement and getting nationwide.
Talking to reporters after the meeting with police, Swaraj Abhiyan leader Yogendra Yadav said police officers wanted farmer leaders to take out their tractor rally outside the national capital, which is not possible.”We will carry out our parade peacefully inside Delhi”.
Sources said that police officers tried to convince protesting farm unions to hold their tractor rally on the Kundli-Manesar-Palwal (KMP) Expressway instead of the Outer Ring Road.
The three laws have already been stayed by the Supreme Court on January 11 till further orders, and the apex court also formed a committee of experts to resolve the deadlock. The panel has been asked by the apex court to submit its report within two months after consulting all stakeholders.

The court-appointed panel on Thursday started its consultation process and interacted with 10 farmer organisations from eight states, including Uttar Pradesh.
Enacted in September last year, the three laws have been projected by the Central government as major reforms in the agriculture sector that will remove middlemen and allow farmers to sell their produce anywhere in the country.
However, the protesting farmers have expressed their apprehension that the new laws would pave the way for eliminating the safety cushion of MSP (minimum support price) and do away with the “mandi” (wholesale market) system, leaving them at the mercy of big corporates. (PTI)