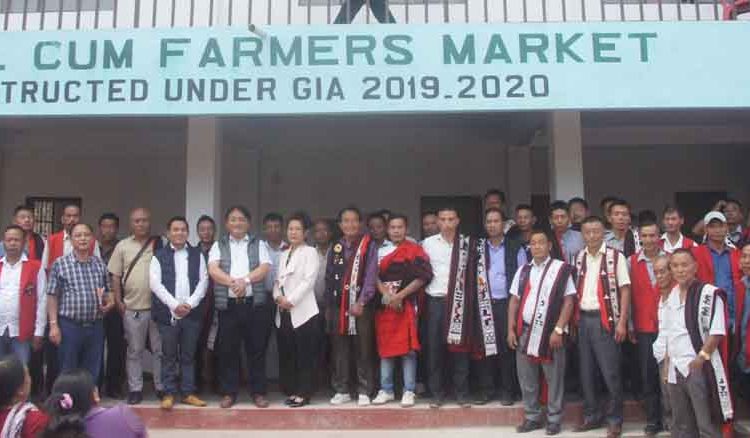 The two storey building has enough space for famers to sell their products and also a spacious hall, kitchen and toilets to operate a restaurant.
Speaking after formally inaugurating the complex, Metsubo Jamir said that the villagers should be thankful to the PDA Government, especially Chief Minister Neiphiu Rio, for understanding the need of the people in the area and making the dream of having a farmer’s market and hotel a reality.
He said that the Government can only provide the infrastructure and it is up to the people to maintain and derive the benefits from whatever the Government agencies provide to the people. In this regard, he strongly urged the villagers to keep the vicinity and the building clean and maintain it as a sacred place where people can buy and sell their products and earn their livelihood.
While strongly advocating hard work among the people, the minister pointed out that God has provided enough fertile land to the Naga people which must be cultivated by the people. He said that the Naga people must start to judiciously cultivate their lands and lead a self-sufficient life.
Chairman of Longsa village council, Talichuba said the newly inaugurated complex was a long felt need of the people, which will serve not only Longsa villagers but also nearby villages in Zunheboto and Tuensang districts. He said the complex by virtue of its location at Longsa-Suruhuto junction will cater to the needs of not only the Aos but also that of the Sumis and the Sangtams.
A short speech was also delivered by Project Director DRDA Mokokchung, Toshimongla Kichu while the pastor of Longsa Baptist Church, Supong pronounced the dedicatory prayer. (Page News Service)