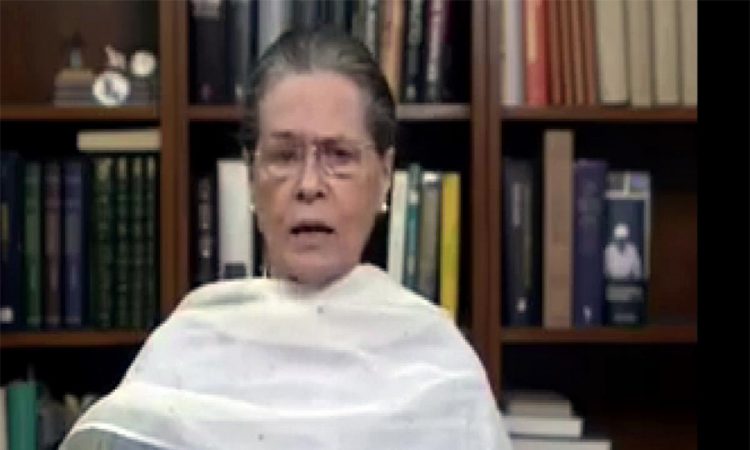 New Delhi, October 2: Calling Mahatma Gandhi the “biggest sympathiser” of farmers, labourers and the working class, Congress president Sonia Gandhi on Friday expressed confidence that the agitation against three recently enacted “black laws” in the agriculture sector will become successful and the peasants will emerge victorious.
Paying rich tributes to Mahatma Gandhi and former prime minister Lal Bahadur Shastri on their birth anniversary, she said while the Mahatma was the biggest sympathiser of farmers, labourers and the working class, Shastri gave the slogan of ‘Jai Jawan, Jai Kisan’.
The Congress president’s remarks came in the form of a video message on a day her party is staging dharnas in every district across the country in favour of farmers and against the three farm laws.
Noting that Mahatma Gandhi used to say that the soul of India resides in India’s villages, fields and barns, she said the country’s farmers and farm labourers are agitating on the streets against the three “anti-farmer black laws”.
“The Modi government is making the farmers cry tears of blood, even though they grow foodgrains for the country with their sweat,” she said.
Sonia Gandhi said the Congress party has always made laws with public consent and has kept the interests of people foremost before enacting laws, as democracy also means that every decision of the country has the consent of countrymen.
“But does the Modi government believe in this? Perhaps the Modi government does not remember that it was not able to change the ‘Right to Adequate Compensation Law’ for rights of farmers through an ordinance.
“The Congress party will continue to fight against the three black laws. Today our workers are agitating in favour of farmers and labourers in every assembly constituency. I want to say with confidence that this agitation of farmers and the Congress will be successful and the farmers will win,” she said in her video message.
The Congress chief said during the coronavirus pandemic, all had demanded from the government that every needy countryman should get free foodgrains.
“Was it possible that without our farmer brothers, we could manage two meals for crores of our people,” she asked.
“Today, the country’s prime minister is doing gross injustice to our ‘Annadata’ farmers. The laws were made for the farmers, but they were not even consulted. The issue was not even discussed…their interests were set aside by talking to their select friends before framing the three black laws,” she said.
Gandhi said when the voice of the farmer was not even heard while framing the laws in Parliament, they were compelled to take to the streets to express their voice peacefully on the path shown by Mahatma Gandhi.
“Far from listening to their voice, the anti-democratic, anti-people government blew lathis on them. What do our farmers and farm labourers want. They only want the right price for their hard earned produce in these laws and this is their basic right,” she noted.
The Congress chief said when grain markets will be abolished, hoarders will be given a free hand to hoard foodgrains and the farmers’ land will be handed over to capitalists for farming. “Then who will protect the crores of small farmers,” she asked.
Observing that the future of farm laborers and others is linked to the farmers, she asked, “What will happen to small shopkeepers and labourers working in grain markets? Who will protect their rights? Has the Modi government thought about this?”
She said the Modi government should remember that it was not able to change the Right to Fair Compensation and Transparency in Land Acquisition, Rehabilitation and Resettlement Act through an ordinance.
Party leader Rahul Gandhi while greeting fellow citizens on Gandhi Jayanti quoted Mahatma Gandhi’s lines in his message, saying — “I will not fear anyone in the world … I will not bow down to anyone’s injustice, I will win over untruth with truth and I can bear all the sufferings while opposing the untruth.”
Sharing a quote of Gandhiji, Priyanka Gandhi Vadra said in a tweet in Hindi, “…it is our duty to stand with the weak through our politics.”
Congress leader Randeep Surjewala also quoted Mahatma Gandhi’s words to say: “The true measure of any society can be found in how it treats its most vulnerable members.”
“On Gandhiji’s 151st Birth Anniversary, let each one of us remember it again,” he tweeted. (PTI)