HomeIndiaFarmer unions ready to discuss agri laws with Centre but it has to be about repealing those: Tikait
India
3 months agoApril 29, 2021Farmer Unionsfarmers protestRakesh Tikait 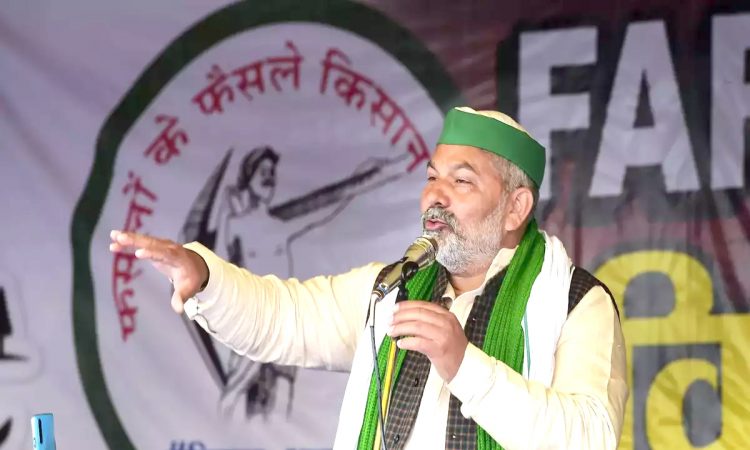 New Delhi, April 29: Bharatiya Kisan Union (BKU) leader Rakesh Tikait on Thursday said the farmer unions are ready to discuss the three contentious agri laws with the Centre whenever it wants to resume talks but asserted the discussion would have to be about repealing the legislation.

Addressing a farmers’ panchayat in Prem Nagar village in Haryana’s Bhiwani district, he said the farmers have to carry on with their agitating for long, but they would “certainly not return to their homes without a victory”.
Haryana BKU chief Gurnam Singh Chaduni accused the government of failing to deal with the COVID-19 situation and said, “Those patients who do not get oxygen or beds in hospitals should be taken to the homes of the BJP MPs and MLAs.”
Tikait, who has in recent months addressed a series of farmers’ gatherings across Haryana, said the tillers have been agitating for more than five months near various borders of the national capital.
“The fight will go on for long, for how many months one doesn’t know. But one thing is confirmed that farmers won’t return without winning it,” he said.
Tikait also said the agitation has got support from people around the country, that includes traders, youth and other sections.
The BKU leader further said if the government wants to resume talks with the farmers’ unions the Samyukta Kisan Morcha, which is spearheading the fight against the farm laws, is ready to do so.
“When the government wants to talk, Samyukta Kisan Morcha will talk. But there will be no talks if the government again sticks to things like suspending these laws for 18 months. We are firm that they have to take back these laws and any talks will start from that point only,” he said.
Tikait told the gathering that the protesting farmers will continue the agitation peacefully till the time their demands are met. He urged the villagers to form small committees to strengthen the agitation.
Cautioning them about the coronavirus pandemic, he asked the villagers to follow all COVID-related protocols like wearing masks, following social distancing norms and maintaining hygiene.
“Don’t hide the disease if you get it, if anyone falls sick, get timely treatment and you will be alright,” Tikait said, adding, “Over here too we are following all COVID-related protocols.”
Slamming the government on the present COVID situation, Chaduni said, What has the government been doing for the last one year? People are dying due to shortage of oxygen and beds.”
About the ongoing farmers’ agitation, he alleged that more than 300 farmers have died but the government is adopting an adamant attitude. “We will not return to our homes, whether it takes five months or five years.” (PTI)