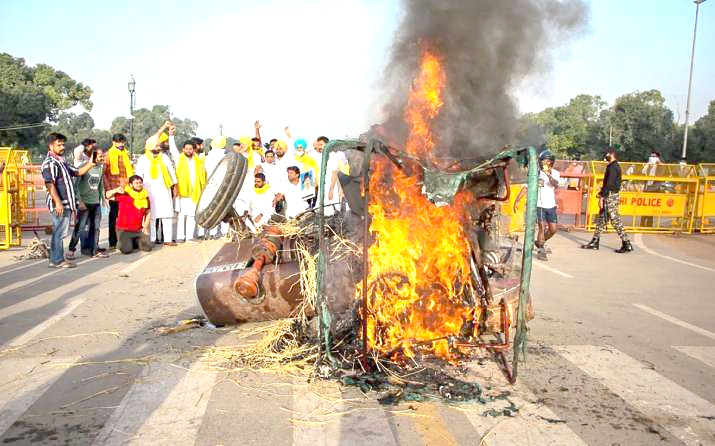 New Delhi, September 28: Youth Congress activists on Monday morning set a tractor on fire at India Gate in the heart of Lutyens Delhi to voice their protest against the contentious farm laws.
Five people claiming to be members of the Punjab Youth Congress have been detained, police said.
According to the police, around 15-20 people carried a tractor on a truck to Rajpath, Man Singh Crossing. They unloaded the tractor from the truck and set it on fire.
Fire officials said they were informed about the incident at 7.42 am and two fire tenders were rushed to the spot.
The blaze has been doused and the tractor was removed, police said.
IYC media incharge Rao said activists of its Punjab unit demonstrated at the India Gate on the occasion of the birth anniversary of revolutionary freedom fighter Bhagat Singh.
“Our country thrives on the blood and sweat of our farmers. From fighting the British to feeding the entire nation, our farmers are the nation’s backbone,” the IYC tweeted.
“On #BhagatSingh’s birth anniversary Youth Congress set ablaze a tractor in protest against the govt’s anti farmer bills,” it added.
Deputy Commissioner of Police (New Delhi) Eish Singhal said five people had been detained and an Innova car that was used has also been taken into police custody.
The detained persons have been identified as Manjot Singh (36), Ramandeep Singh Sindhu (28), Rahul (23), Sahib (28) and Sumit (28), all residents of Punjab, police said.
They claimed to be members of Youth Congress Punjab. Their affiliation is being verified, according to the police.
Reacting to the incident, Delhi BJP media relations head Neelkant Bakshi tweeted that he would file a case against the “dangerous conspiracy to foment violence by spreading rumours”.
The incident comes amid protests by farmers and the Opposition across the country over the three contentious farm legislations, which were passed by the Parliament last week and got presidential assent on Sunday.
Farmers have expressed apprehension that the laws would pave a way for the dismantling of the minimum support price system, leaving them at the “mercy” of big companies.
Delhi Congress chief detained
Delhi Congress leaders and workers, including its president Anil Kumar, were detained by police on Monday during a protest against farm bills at Rajghat.
Kumar said a protest march from Rajghat to Raj Niwas was also scheduled but police detained party leaders and workers before it could begin.
“We wanted to submit a memorandum to the Lt governor against the farm bills passed by Parliament but we were detained by the police. The Congress will not rest till the Modi government withdraws its anti-farmer bills,” he said. (Agencies)