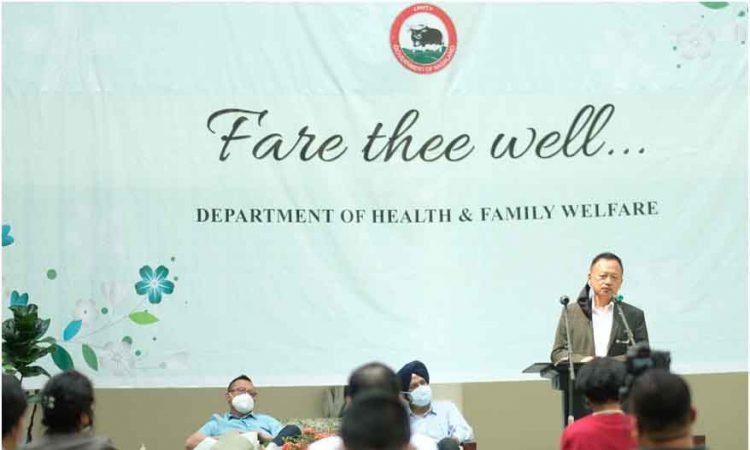 Dr. Kevichusa Medikhru in his speech mentioned that it is a privilege to have Medical Minister and Principal Secretary for the auspicious program and acknowledged their presence with gratitude. He further mentioned that God has been good and never failed him through different chapters of his career in the department by giving him strength not to falter.
Dr. Kevichusa Medikhru stated that he is thankful for the privilege to work as Medical Officer, SMO, CMO, DDO, and Program Officer for different programs like Food Safety, IDSP, Health Intelligence Bureau, NVBDCP, Mission Director NHM and Principal Director.
He urged the officers and staff that “it is time to develop the sense of ownership from this department. Each officer is the owner of the department and therefore should build the department yourself otherwise nobody from outside the department will come and build for you. Ministers and Principal Secretaries will come and go but the department officers will retain.”
Minister, Health & Family Welfare, S Pangnyu Phom stated that the world we are all living is temporary and likewise a government servant and politician will all retire one day. He expressed that during his years of serving as a Medical Minister he has noted that Dr. Kevichusa is a special and transparent officer. “He has exhibited his caliber during his service and especially during the pandemic times which all the officers and staff should take example for what he has done for the department and for the people of our State”.
Medical Minister also urged the Department, officers and staffs of Directorate and District to pledge and say no to division but instead march forward as one family in unity as one chain family to overcome all struggles especially during this COVID pandemic situation.
“If was all motivate one another by giving constructive criticism we build a strong curve for the benefit of our common people of the State. Let us sail the same boat to become the best performing department in the State,” he said.
He further appreciated and congratulated the outgoing Principal Director, incoming Principal Director, senior officers, CMO, MS and all health workers in the state for fighting the pandemic situation since last year and still fighting strongly. He stated, “I can proudly say that because of officers and the department our State is one of the best performing State in the Country”.
The Minister further encouraged everyone to continue to work together to save the people of our state.
Principal Secretary Health & Family Welfare, Amardeep Singh Bhatia, IAS in his speech mentioned that Dr. Kevichusa has served the department in various capabilities and his depth knowledge/insight to the manner in which a program are running and should run is visible.

He expressed that his service will be missed, however, every life has different stages and thus one has to graduate from one stage to another and having served the department/government for 35 years is lucky and a moment of celebration.
Principal Secretary further mentioned that a professional never retires. “You may retire today from Government Service but you continue to be a professional,” he said adding that his professionalism will not only be helpful for himself but will also benefit the society further. (Page News Service)