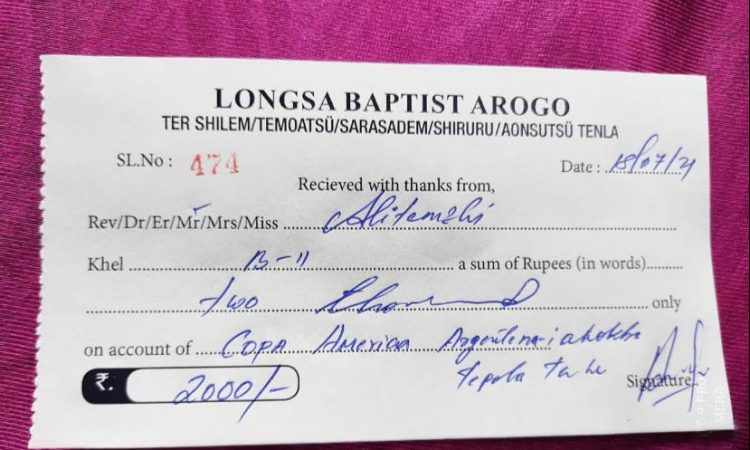 A photo of the cash receipt that went viral.

DIMAPUR, JULY 27: On Sunday ~ July 18 ~ Pastor Supong Chiten was in receipt of an unusual offering. A young man had just walked into his office at Longsa Baptist Church (Mokokchung District) that day and made an offering of Rs 2000.

On the cash receipt, written with a ball pen, it said: on account of Argentina’s triumph at the Copa America. Unsurprisingly, a photo of that cash receipt went viral on social media recently.
“Yes, he came to my office and submitted the offering. I was surprised, initially. But we accepted it from him”, the Pastor told Nagaland Page.
The contributor, Alitemshi, is a 30-year-old soldier in the Naga Regiment. As he is on leave now, the die-hard Argentina fan could make the thanksgiving offering at his church in Longsa Village.
Like millions of other Argentina fans, supporting the Albicelestes has mostly been an exercise in suffering, especially in the more recent years.
“Since childhood, I have always identified football with Argentina. But we have only known losses. We lost the World Cup final (2018), two Copa America finals (2015 and 2016)”, he said. The Copa America 2016 was the competition’s centenary edition.
He said watching Argentina lift the Copa America this year, after a series of tournament heartbreaks, prompted him to make the thanksgiving offer to the church.
“If I had more, I would have paid more”, he said. According to him, people have celebrated Argentina’s triumph in their own ways.

“Some have organised parties and gotten drunk. I did not want to do that. There is no point getting drunk and arguing with people in order to celebrate a win. That’s why I decided to give the money to the church”, he shared.
As put by the Pastor, the viral photo on social media has attracted “positive and negative” comments. “But mostly, they are positive”, he said.
After all, to the followers of Christianity, the Bible counsels thus: Each of you should give what you have decided in your heart to give, not reluctantly or under compulsion, for God loves a cheerful giver.