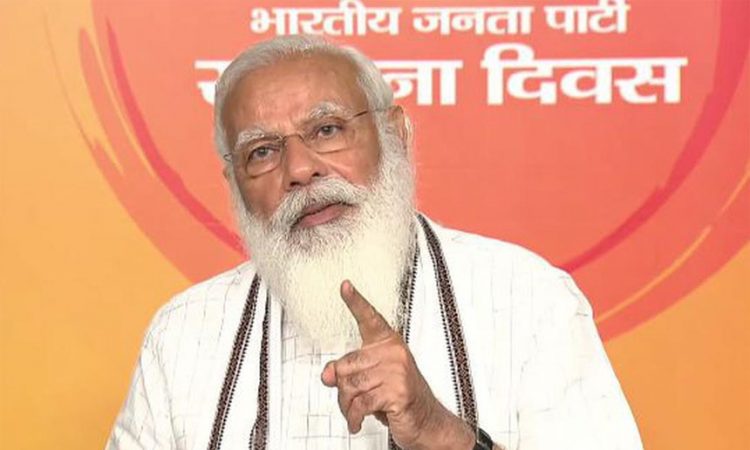 New Delhi, April 6: Prime Minister Narendra Modi lashed out at the BJP’s rivals on Tuesday as he accused them of spreading “false narratives” over issues ranging from the farm laws to the citizenship law to trigger political instability in the country, and asked party members to caution people about their reality.

Addressing party members on its 41st foundation day, he said imaginary fears and rumours are stoked against his government with claims that people’s citizenship will be revoked, farmers’ land will be seized, Constitution will be changed, or reservation will be scrapped over various issues.
Modi said those who cannot accept their electoral defeats, a reference to opposition parties, people having vested political interests and those who are pathologically inimical towards the BJP are behind this.
What they are doing will harm the country for a long time, he said. “You have to caution people about their reality,” he said in a virtual address, watched by party members across the country.
“Every BJP worker will have to understand that there is deliberate politics behind this. This is a very big conspiracy. Its aim is to trigger political instability in the country. A variety of rumours is spread, illusions are created and imaginary fears are stoked for this,” he said, describing it as a serious challenge.
“A new tactic, strategy have entered our public life. What is this? False narratives are manufactured. Sometime it is about the CAA (Citizenship (Amendment) Act), sometime it is about farm laws and sometime it is about the labour laws… Blatant lies are spread quickly by some individuals and organisations. We have to be vigilant and go to people with true information,” he said.
Opposition parties have criticised the laws on citizenship, and farm and labour reforms over a number of issues, including some which the prime minister has often rejected as blatant lies.
Modi also hit out at those who have often dubbed the BJP as an “election-winning machine” over its poll triumphs, and accused them of double standards, saying rival parties and their leaders are lauded when they win.
These people do not understand the maturity of Indian people and its democracy, and nor do they appreciate citizens’ hopes, expectations and dreams, he said, asserting that voters have evaluated the party over its performance.
The BJP is a continuous movement to win people’s hearts as it serves people for five years honestly, be in the government or outside, he said.
The poor and the rural India have embraced the BJP as for the first time they have seen ‘antyodaya’ (welfare of the most deprived) being realised through a number of schemes, he said, citing a number of welfare measures, including opening bank accounts, huilding houses and toilets and providing free LPG cylinders to the poor among others.
The youngsters born in the 21st century are also with the BJP, he said, adding that the party serves people when in power as well as when out of it honestly.
“The poor as well as the middle class have associated themselves with the BJP. We are in cities as well as in villages. The BJP today is a party of national interest as well as regional aspirations,” he said.
Taking a swipe at the dynastic leadership among most of the opposition parties, which are generally dubbed as part of “secular” bloc, he said their veil of secularism is now slipping away.
Secularism was reduced to working for the welfare of a few while those worked for every section of society were dubbed “communal” by rivals, Modi said, asserting that the mantra of ‘sabka saath, sabka vikas, sabka vishwas’ has changed this definition.

With a section of farmers protesting against his government over the three farm laws, the prime minister asserted that the interests of small farmers, who are over 80 per cent of the agriculture community, have been at the centre of its schemes and programmes.
In his speech, Modi also said the BJP has risen in its over four decades of existence on the strength of its ideology, and said its work for the poor’s welfare have realised Mahatma Gandhi’s idea that the interest of the poorest should be central to a government’s work. (PTI)