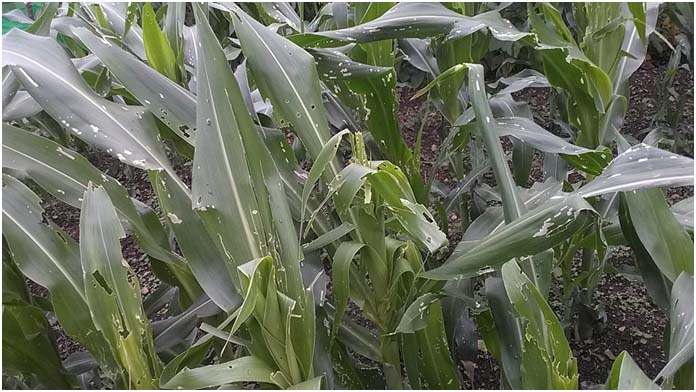 Dimapur, May 19: Fall Armyworm (FAW) infestation in Nagaland has been reported during the current Kharif season. This year infestation reports estimates to 2961.95 ha, said an official bulletin.
In Nagaland, the first outbreak of FAW was reported in May, 2019.
Fall army worm is exotic and invasive migratory pest. A voracious feeder, the adult moth are capable of flying long distances to cover 100 Km in one night alone. In its life time and a generation, an adult can fly up to 300 miles. Their migration rate is remarkably fast that some scientists speculate that its fast migration is being aided by the movement of air. The female moth can lay up to 1500 egg in a single or in multiple clusters on maize or its host plants.
Last year 4470.17 ha. of Kharif maize was infested by FAW in the State. However it was brought under control without causing any economic losses. This year infestation reports estimates to 2961.95 ha.
According to DIPR, input support from the Agriculture Department has been dispatched to the affected areas. Human resource support from ATMA, KVKs, CIPMC and extension personnel of the Department are involved in the surveillance, monitoring and control operations.
Another new pest, a semilooper, commonly known as inch worm, has been reported from Kohima and Zunheboto District. The pest is found to feeding on crops like potato, chilli and beans. The total area infested is approximately 700- 800 ha. Mechanical control and Biopesticides such as Bacillus Thuringiensis, Beauveria bassiana and Azadirachtin is being used for control measures which will also be followed by release of egg parasitoids – Trichogramma pretiosum which is produced by the Department’s Bio-Control Laboratory in Medziphema.
This semilooper infestation with high population above economic threshold level is being noticed for the first time in Nagaland. It is presumed that it could be a migratory pest. The identification of this pest is under process which will take some time. However, general control operations for semilooper are in progress to prevent further spread. In case of severe outbreak the recommendation would be destruction of crops and take up alternative crop/ resowing, it said.
This has contained the peak periods of incidence, thereby, reducing the economic losses of the farmers to an extent. Moreover, plant protection sprays in the affected fields and awareness creation among the farming communities even in the midst of the present COVID-19 lockdown are being taken up as immediate measures since the agriculture activities are fully exempted. The ongoing surveillance and monitoring and logistic support to the districts and sub-divisions is supported through the State ATMA programme as interventions in a gap filling mode, said th DIPR report. (Page News Service)