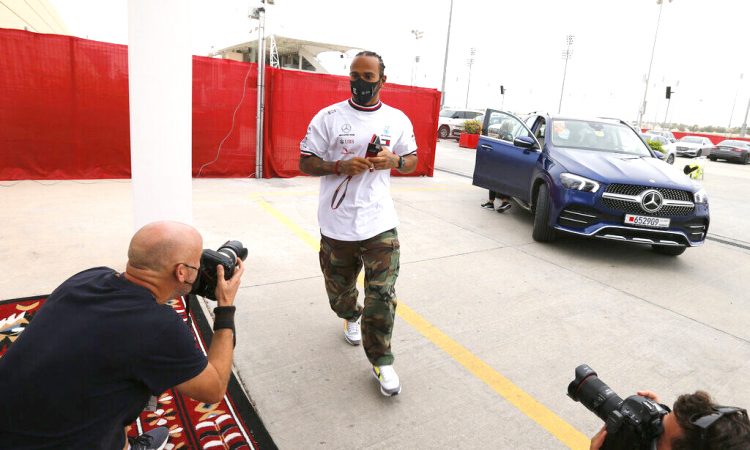 Mercedes driver Lewis Hamilton of Britain arrives at the paddock ahead of the first free practice at the Formula One Bahrain International Circuit in Sakhir, Bahrain, Friday, Nov. 27, 2020 (AP)

Sakhir (Bahrain), November 27: Seven-time Formula One champion Lewis Hamilton set the pace in Friday’s opening practice for the Bahrain Grand Prix ahead of teammate Valtteri Bottas who completed a one-two for Mercedes.
The Briton, who equalled Michael Schumacher’s record haul of seven titles at the last race in Turkey, lapped the 5.4km Sakhir desert track in one minute, 29.033 seconds, 0.449 seconds clear of Bottas.
Sergio Perez in the Racing Point was third, 0.967 seconds off the pace.
Hamilton heads into Sunday’s race, the first of a whirlwind Middle Eastern triple-header that wraps up the season, as favourite to chalk up an 11th win of the season.
Victory a week later, also in Bahrain but around the track’s shorter outer loop, and then at the season-ending Abu Dhabi Grand Prix would see him end a record-breaking campaign with 13 wins, his most in a single year.
It would also make him only the third driver after Schumacher and Sebastian Vettel to win 13 races in a season.
Carlos Sainz was fourth for McLaren, ahead of AlphaTauri’s Pierre Gasly, with the Red Bull pair of Max Verstappen and Alexander Albon sixth and seventh respectively followed by Renault’s Esteban Ocon.
Lance Stroll was ninth in the other Racing Point and Daniel Ricciardo rounded out the top 10 for Renault.
Charles Leclerc, who was on course for a pole-to-flag win in Bahrain last year, was 11th in his Ferrari. His team mate Vettel, the most successful driver in Bahrain with four wins, was 12th.
The session, which took place under overcast skies, was largely uneventful apart from occasional spins and lock-ups as drivers got to grips with the track.
Alfa Romeo reserve driver Robert Kubica made his fourth practice appearance of the season, taking over Kimi Raikkonen’s car for the session.
At Williams, development driver Roy Nissany got some track time in Briton George Russell’s car. (Reuters)