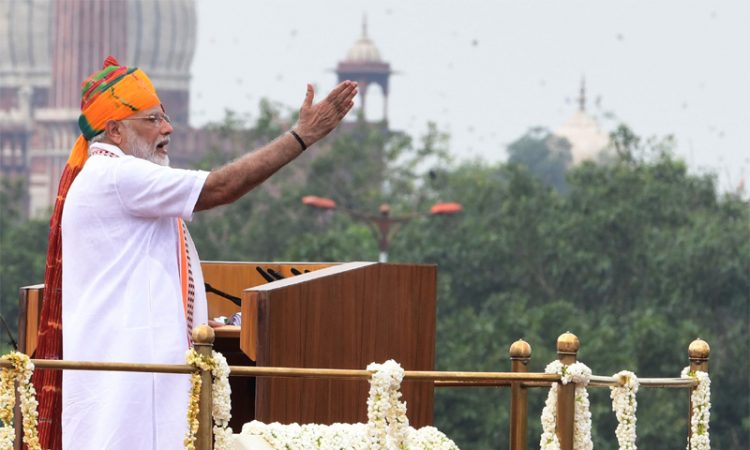 NEW DELHI, August 15: Taking forward the country’s pledge to make India free from single-use plastic by 2022, the Prime Minister Narendra Modi on Thursday appealed people to take “first big step” in this direction on birth anniversary of Mahatma Gandhi on October 2 and called for initiating a “mass movement” to get rid of hazardous plastic.
“Remembering revered Bapu, we should move out of home collecting single-use plastic from homes, streets, chowks and drains. Can we take first big step on 2 October, towards making India free from single-use plastic? Come my countrymen, let us take this forward,” said Modi.
Addressing the nation from the ramparts of the Red Fort, the Prime Minister appealed municipalities, municipal corporations and ‘Gram Panchayat’ to make arrangements to collect single-use plastic and urged start-ups and entrepreneurs to join hands towards recycling plastic and using it in highways making and other areas.
India had on the occasion of the World Environment Day last year voluntarily committed to eliminate, at least, single-use plastic by 2022.
The single-use plastics, often referred to as disposable plastics (use-and-throw items), include carry bags, food packaging, bottles, straws, containers, cups and cutlery. These are the items intended to be used only once before they are thrown away or recycled.
As far as overall plastic waste in the country is concerned, the studies of the Central Pollution Control Board (CPCB) show that India every day generates 25,940 tonnes of plastic waste, but 10,376 tonnes (40%) of it remains uncollected. The uncollected plastic wastes cause choking of drainage and river systems, littering marine ecosystem, ingestion by stray animals, soil and water pollution and open air burning, leading to adverse impacts on human healths and environment.
Underlining how alternatives may help people get rid of hazardous plastic carry bags, Modi requested shopkeepers to put a signboard exhorting customers not to use plastic bags and that they should instead bring their own cloth bags or buy cloth bags for carrying their goods.
He said, “Let us create an environment. We generally give gifts to people on Diwali. Why not pack those gifts in cloth bags this year and every time? If people go to market with cloth bags, that will be an advertisement for your company too. If you give a diary or calendar nothing will happen. But if you give a bag, that will be a medium of your advertisement.
“It should be a jute bag. It will help farmers. The cloth bag will help farmers. These are all small things. It will help poor widows who are into sewing. Our small steps can change the lives of ordinary people and we have to work towards that.”
Responding to the Prime Minister’s appeal, the Union environment minister Prakash Javadekar said his ministry would review all initiatives and campaigns in this regard and chalk out a concrete plan to realise the target.
He said a massive public campaign will be launched engaging all stakeholders. “In this regard a series of meetings will be done with all stakeholders including state governments to chalk out a concrete plan to make it a people’s campaign to realise the ultimate target,” said Javadekar in a statement from Sao Paulo in Brazil.
The CPCB studies show that nearly one-sixth of the total plastic waste in India is generated by 60 major cities where the problem of uncollected waste is as severe as it is in the rest of the country. In fact, five cities – Delhi, Chennai, Kolkata, Mumbai and Bengaluru – together generate more than 50% of the total plastic waste generated in these major cities.
Legally, the states have two options to end the menace of single-use plastic. They can either legislate stand alone law to ban single-use plastic or come with waste management law making specific rules for plastic waste or single-use plastic waste.
A number of States/UTs have been implementing regulations to manage plastic pollution. While some states – Maharashtra, Madhya Pradesh, Himachal Pradesh and Punjab – have already come out with specific legislation on waste management introducing rules on plastic carry bags, some others have issued directions under the Environment (Protection) Act, 1986. Such states are: Haryana, Uttaranchal, Delhi, Rajasthan, Uttar Pradesh, Karnataka, Chhattisgarh , Sikkim, Arunachal Pradesh and Tripura. (TNN)