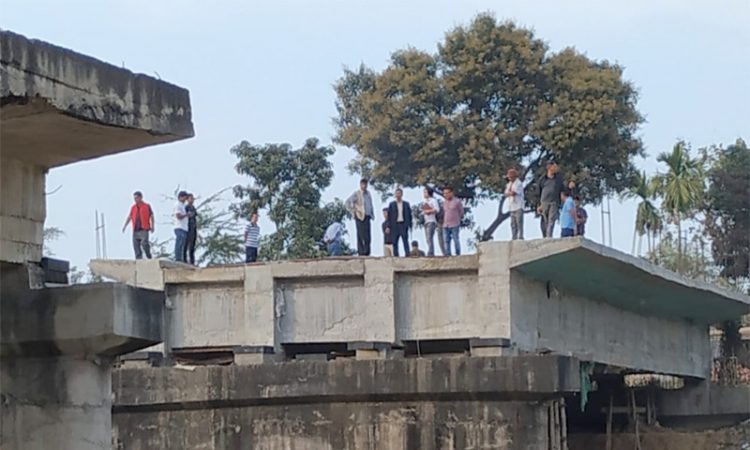 Dimapur, February 21: Two engineers – Er Aman Deep Garg, Managing Director, Chartered Engineer, New Delhi and Dr Oinam Ramanbabu Meetei of IIT Tirupati are in Dimapur to inspect the 340 meters long Shozukhu-Zukihe Bridge, which has been under construction for the past 14 years. After the inspection, they will submit a report about the status of the bridge and what can be done next.
On the first day of their inspection today, they refrained from making any opinion about the under construction bridge other than that they will have to do more technical surveys. On completion of the technical survey, they will put up a proposal to the Government.
The bridge was supposed to get completed in the year 2007, but due to disagreements between M/s Pabscon the PWD (Roads & Bridges), the construction was halted and the case reached the court.
According to Kakheho Chishi, a resident of the area, M/s Pabscon alleges that the department didn’t pay the amount for which the work was done, while the department alleges that money wasn’t released as the work wasn’t enough.
The Khughaboto Area GBs’ Association (KTKK), after waiting patiently for the concerned parties to clear their dispute, on April 18, 2017 asked the parties to resolve their differences within 15 days in the larger interest of thousands of people for whom the bridge is the lifeline.
But even after that when the case remained unresolved, the citizens of the area crowd funded about Rs 1 crore and constructed a part of the bridge. The work for the same started in October 2017, but was soon halted as the drop of water level exposed a seemingly weak foundation and after an inspection by the PWD (R&B), it was decided that further construction of the bridge would be allowed only after assessment of the safety of the bridge by experts.
On February 3 this year, principal of Kamrup Polytechnic, Guwahati studied the geotechnical and structural aspects of the bridge accompanied by officers of PWD (R&B) SE circle 1, Er Ahoto Sema, Road-II sub division SDO, Er Muzivoyi Ringa and JE, Dimapur Division, Er Howoto Chishi. The report is expected soon.
Er Muzivoyi Ringa was also present during the preliminary inspection of Friday by the two experts of the substructure and superstructure of the bridge.
Though the experts refrained from making any detailed opinion, Er Garg, however, said that the bridge needs to be strengthened and might need more investments. He said it remains to be seen how the drainage system, especially during the rainy season, impacts the bridge.
The residents of the area, according to Kakheho Chishi, are facing severe economic impact due to the absence of the bridge, besides causing inconvenience to students and day to day life tasks. They are expecting the Government to take actions immediately once the reports are submitted, and assured their full cooperation in the construction. Residents claimed they are ready to go ahead with the construction themselves even if that leads to legal consequences and the whole village ends up in jail.
For now, the residents are forced to cross the river using two makeshift bridges made of bamboo and wood. Crossing the wooden bridge costs Rs 10 for two-wheelers, Rs 40 for autos, Rs 50 for four-wheelers, and Rs 100 for trucks. (Page News Service)