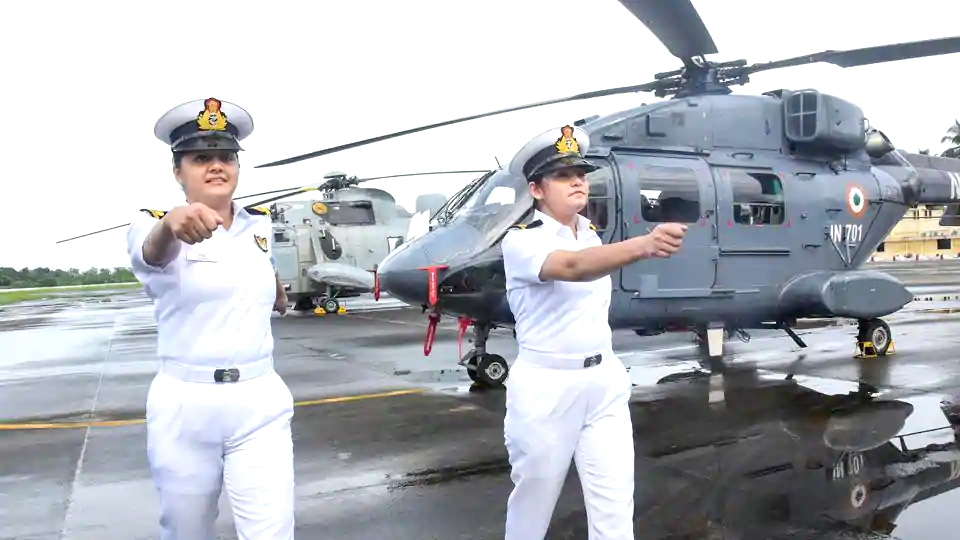 Sub Lt. Riti Singh and Sub Lt. Kumudini Tyagi, the first women airborne tacticians who will operate from deck of warships, after they passed out of Indian Navy's Observer Course, at Southern Naval Command, Kochi on Monday. (PTI Photo)

New Delhi, September 21: One of the two women officers from Indian Navy, who have been selected to join as ‘Observers’ (Airborne Tacticians) in the helicopter stream, have said they are thrilled by the new profile.
“It feels great to be a part of Indian Navy’s history today,” said Sub Lieutenant Kumudini Tyagi.
“Being combat-ready platforms of navy, through the helicopters, we will be capable of carrying out combat roles including control of weapons and onboard sensors. This profile is exciting and thrilling at the same time,” she added.
This will be the first time that women will be posted in frontline warships.
Apart from Sub Lieutenant Tyagi, the other woman officer is Sub Lieutenant Riti Singh.
Earlier, entry of women was restricted to the fixed wing aircraft that took off and landed ashore.
The two are a part of a group of 17 officers of the Navy, including four women officers and three officers of the Indian Coast Guard, who were awarded ‘Wings’ on graduating as ‘Observers’ at a ceremony held today at INS Garuda, in Kerala’s Kochi, a government statement said.
The ceremony was presided over by Rear Admiral Antony George, Chief Staff Officer (Training) who presented the awards and coveted wings to the graduating officers.
The officers of the 91st Regular course and 22nd SSC Observer course were trained in air navigation, flying procedures, tactics employed in air warfare, anti- submarine warfare and exploitation of airborne avionic systems.
These officers would serve on-board Maritime Reconnaissance and Anti-Submarine Warfare aircraft of the Indian Navy and Indian Coast Guard, the statement said. (Courtesy: HT)