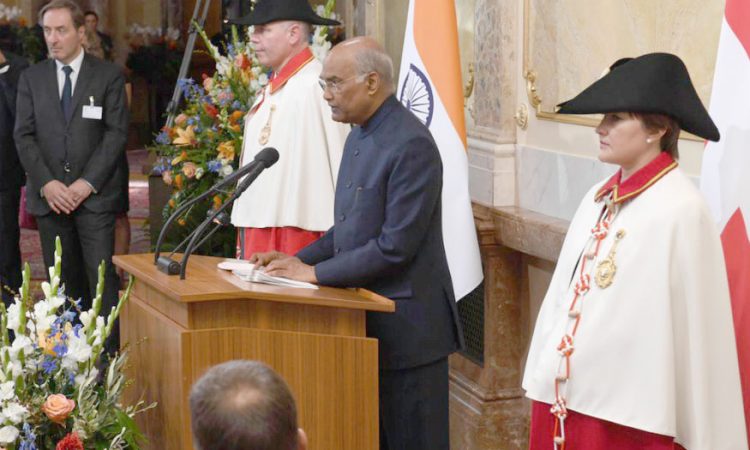 Berne, September 13: Underlining that tax evasion and money laundering have strong links with terrorism, President Ram Nath Kovind on Friday said the agreement on the automatic exchange of tax information between India and Switzerland is a “very positive development” which will help fight the scourge.
President Kovind, addressing the Federal Council of Switzerland, sought the country’s support to enhance global efforts to defeat and destroy all manifestations of terrorism.
“I am happy to note that we will have the first automatic exchange of information on tax matters in the coming weeks. It is a very positive development. Tax evasion and money laundering have strong links with terrorism.
“The scourge of terrorism is among the gravest challenges that the world faces today. India has been a victim of state sponsored terrorism for decades. We seek your support to enhance global efforts to defeat and destroy all manifestations of terrorism,” Kovind said on the second day of is three-day visit to Switzerland.
The Automatic Exchange of Information (AEOI) between India and Switzerland, known as a global wealth management hub, is being seen as a major boost in India’s fight against suspected black money stashed abroad.
The details that Switzerland will be sharing with Indian tax authorities under this framework would include account numbers, credit balance and all kinds of financial income for each Indian client of every Swiss financial institution.
The first despatch this month would be followed by further despatches on a yearly basis, according to Switzerland’s Federal Department of Finance (FDF).
However, the details received by India would be governed by confidentiality provisions.
Switzerland agreed to the AEOI with India after months-long process, including review of necessary legal framework in India on data protection and confidentiality.
The data that was prepared by all Switzerland-based banks under a direction from the Swiss government for despatching further to the Indian authorities provides full details of the entire flow of funds to and from all the accounts that were active even for a single day in the year 2018.
The data can be quite useful for establishing a strong prosecution case against those who had any unaccounted wealth in those accounts, as it provides entire details of deposits and transfers as well as of all earnings including through investments in securities and other asset classes. (PTI)