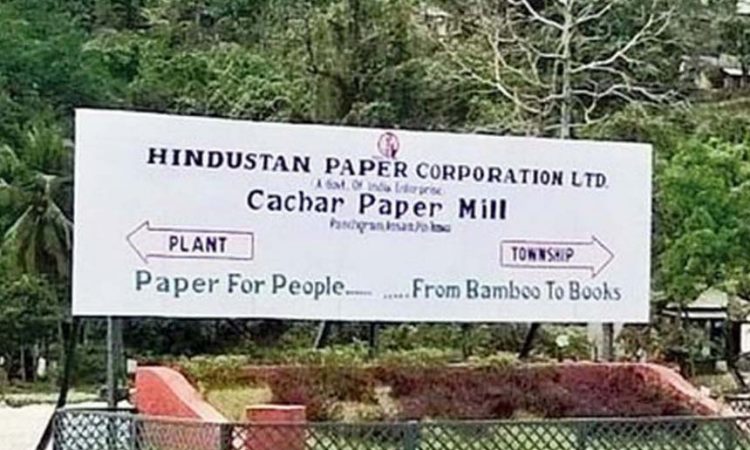 Guwahati, September 4: The liquidator of central PSU Hindustan Paper Corporation Limited (HPCL) has issued eviction notices to 900 employees of its two defunct paper mills in Assam asking them to vacate their official quarters within 15 days from September three to facilitate sale of the units’ physical assets.
The notices to employees of Nagaon Paper Mills and Cachar Paper Mills in the state’s Barak Valley region, who are staying in quarters, have been issued by HPCL Liquidator Kuldeep Verma and were made available to the media on Saturday.

A prominent union leader of the mills claimed that the staff were not paid their dues for the past 56 months, 93 of them lost their lives during the period due to lack of proper treatment and the quarters will have to be vacated “over their dead bodies”.
All those issued notices must “vacate the accommodation/quarters occupied by them within 15 days by handing vacant, physical and peaceful possession to the liquidator through authorised representatives posted for the purpose, failing which legal action will be taken for getting back vacant possession of the accommodation/quarters,” the notice stated.
Verma stated in the notice that to facilitate the sale of the paper mills and to realise maximum value, it is necessary for the liquidator to get vacant possession of the land buildings being put for sale in liquidation.
The notice has been issued individually to all the occupants and also sent to all employees’ association/workers’ union of the defunct paper mills.
Cachar Paper Mill at Panchgram in Hailakandi district and Nagaon Paper Mill at Jagiroad in Morigaon district have been non-functional since October 2015 and March 2017 respectively.
President of Joint Action Committee of Recognised Unions (JACRU) of both Nagaon and Cachar Mills, Manabendra Chakraborty, said the quarters will be vacated “over the dead bodies of the employees”.
“The employees have not been paid their dues for the last 56 months, 93 people have died so far due to lack of proper treatment, including four who died by suicide. Now they are being asked to vacate the quarters which is not only illegal but also a grave human rights violation,” he said.
He appealed to Chief Minister Himanta Biswa Sarma to ensure justice to the employees who have suffered immensely for more than four years.
Chakraborty also urged both the state and central governments to fulfil their commitments and release all legal dues of the workers and save the lives of the remaining employees.
In the two mills, there are around 3,600 employees, 24,000 contractual workers and more than two lakh suppliers and contractors, the union leader said.
The BJP government had promised to revive the paper mills since Sarbananda Sonowal became the chief minister in 2016 and even during campaigning in this year’s assembly polls, the party had assured people that steps will be taken to revive the mills.

The National Company Law Tribunal (NCLT), after several rounds of meetings between all stakeholders and a number of hearings, had ordered the liquidator on April 26 to sell all assets of the two closed paper mills of the HPCL as per the decision of the National Company Law Appellate Tribunal (NCLAT).
Accordingly, the HPCL Liquidator Kuldeep Verma on June one had issued advertisements seeking bids for the e-auction at a reserve price of Rs 1,139 but there were no bidders till the last date on June 15. (PTI)
Subsequently on June 22, a new auction notice for the sale of the two mills was issued by the liquidator at a reserve price of Rs 969 crore, Rs 170 crore lower than the previous price.
Opposition parties – the Congress, AIUDF and the Assam Jatiya Parishad – had urged Prime Minister Narendra Modi and the state chief minister to intervene and ensure that the paper mills are not auctioned but steps are taken to revive them.
Assam Pradesh Congress Committee (APCC) president Bhupen Kumar Bora on Saturday constituted a Hindustan Paper Corporation Employees Redressal Committee (Nagaon and Cachar), headed by Nagaon Lok Sabha MP Pradyut Bordoloi, to urgently look into the “autocratic order” to vacate residential quarters of the employees.
The eight-member committee, also comprising MLAs Kamalakhya Dey Purukayastha, Jakir Hussain Sikdar and Sashikanta Das, will also look into other grievances and problems faced by the employees since the closure of the mills, APCC general secretary and party spokesperson Bobbeeta Sharma said. (PTI)