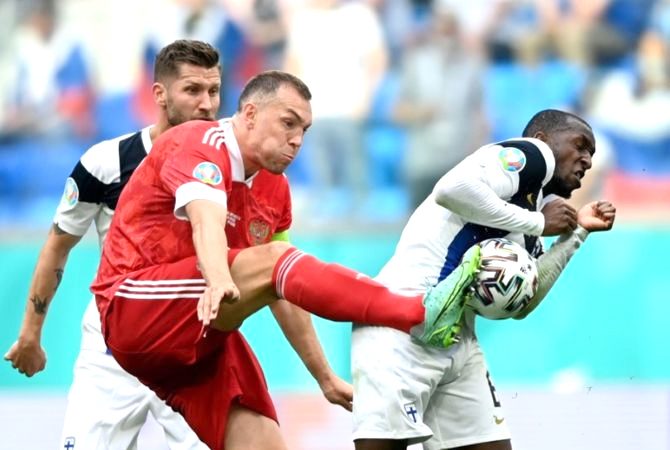 ST PETERSBURG, June 16: A goal in first-half stoppage time by Aleksei Miranchuk got Russia’s Euro 2020 campaign back on track as they beat Finland 1-0 in Group B on Wednesday.

The Russians, who remain unbeaten against the Finns since their first meeting in 1912, made amends for their opening loss to Belgium as the group remains wide open.
The Finns, winners 1-0 over Denmark in their first game that was marked by Christian Eriksen’s heart attack on the pitch, almost made the perfect start when Joel Pohjanpalo’s third minute header beat the Russian keeper but was ruled offside after a VAR review.
It was the hosts, fired up by the home crowd, who took control in the first half, with the Finns sitting back and soaking up the pressure.
The visitors waited for the occasional break and both Pohjanpalo and Teemu Pukki tested goalkeeper Matvei Safonov.
An injury to Mario Fernandes after a rough fall in the 26th minute did not shift Russia’s focus and his replacement Vyacheslav Karavaev almost tapped in a cutback at the far post minutes after coming on.
Their dominance finally paid off in stoppage time thanks to a piece of magic from Miranchuk, who took on two defenders on the right, changed direction and scooped the ball into the far corner with a superb left-footed effort with Russia’s first shot on target.
The Finns shot out of the blocks after the break with Pukki carving out two chances early on.
That, however, came with a risk as it opened up spaces for Russia, who were a threat on the break with Rifat Zhemaletdinov’s low shot veering just wide in the 67th and Daler Kuzyaev’s curled effort forcing a superb save from keeper Lukas Hradecky as Finland’s energy gradually faded.
Russia held on to earn three points, with Stanislav Cherchesov’s side up to second in the standings on three, ahead of Finland thanks to the head-to-head result. Belgium, who beat Russia 3-0 in their opener, top the group ahead of their game against Denmark on Thursday.
Hummels own goal gifts France 1-0 win over lacklustre Germany
An own goal by Mats Hummels was enough to give France a 1-0 victory over Germany in their opening Euro 2020 Group F match on Tuesday as the sluggish-looking hosts lost their opening fixture at the European Championship for the first time.
The world champions took the lead in the 20th minute when midfielder Paul Pogba’s superb raking pass was fired back across the goal by Lucas Hernandez and defender Hummels shanked the ball into his own net as he tried to clear.
It was a deserved win for France, who also hit the crossbar while the Germans now have to up their game against holders Portugal on Saturday when France play Hungary.
Germany’s record 50th Euro match got off to a tentative start before a couple of French chances fell to Pogba and Kylian Mbappe.
The visitors’ gradual pressure, deploying their speed down the wings, paid off when Pogba picked out Hernandez with an outstanding cross-field pass.
He charged through and cut the ball back with Hummels, who had been dropped more than two years ago and was recalled for the tournament, clipping it past his own goalkeeper Manuel Neuer.
The Germans, desperate to impress in front of a home crowd to make amends for their shock 2018 World Cup first-round exit, rarely broke through the French rearguard.
When they did it was usually with Robin Gosens from the left and one of his crosses found Ilkay Gundogan, whose his mis-hit effort veered wide of the post.
It was France who almost scored again in the 52nd when another quick break saw Adrien Rabiot cut in from the left but he hit the post with Neuer already moving in the opposite direction.
That looked to shake the hosts into action and they carved out three consecutive chances, with Gosens again in the mix, until an injury to Benjamin Pavard around the hour mark gave the French some much-needed respite.
France gradually conceded possession but remained lethal on the break with Mbappe and Karim Benzema both putting the ball in the net but having their efforts ruled offside.
Mbappe was also denied what looked a certain penalty after out-sprinting Hummels to chase down a long ball in the 78th minute.

France, now unbeaten in their last 17 competitive outings, kept their cool until the end to launch their title quest with a morale-boosting win to go second in Group F behind holders Portugal, who beat Hungary 3-0 earlier on Tuesday. (Reuters)