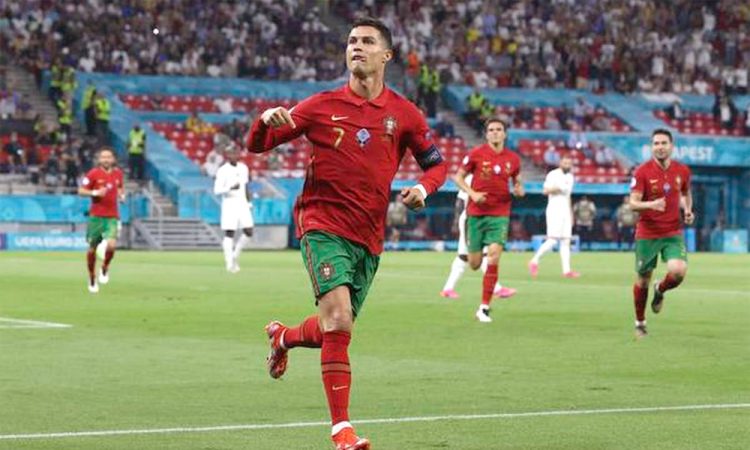 Portugal's Cristiano Ronaldo celebrates after scoring his side's second goal during the Euro 2020 soccer championship group F match between Portugal and France at the Puskas Arena in Budapest on June 23, 2021. | Photo Credit: AP

BUDAPEST, June 24: Cristiano Ronaldo kept Portugal alive in Euro 2020 with two penalties to cancel out a brace from France’s Karim Benzema in an enthralling 2-2 draw that sent both sides into the last 16 in a breathless conclusion to Group F on Wednesday.

Benzema confirmed his return from international exile with his first goals for France for more than five years after being recalled for the tournament.
But it was Ronaldo who again grabbed the headlines as he equalled the world record 109 international goals scored by Iran’s Ali Daei — ensuring that the defending European champions scrambled into the knockout phase.
Ronaldo tucked away the first of three penalties in the match in the 31st minute to give his side a deserved lead but Benzema equalised from the spot in first-half stoppage time.
Benzema struck again just after halftime from Paul Pogba’s superb pass and at that stage Portugal were heading out of the competition they won by beating France in 2016.
Ronaldo beat Hugo Lloris from the spot again on the hour, however, shortly before Pogba thumped a long-range effort against the crossbar in a match that sprung to life after a cagey start.
Portugal hung on the draw which meant they finished third in a heavyweight group with four points, behind Germany (four points) who twice came from behind to draw 2-2 with Hungary.
Portugal will play Belgium while France topped the group with five points to avoid a Wembley clash with England and instead will take on Switzerland.
Portugal bossed the first half and were awarded a penalty in the 27th minute after Lloris’s attempted punch wiped out Danilo. Lloris was shown a yellow card before Ronaldo smashed the penalty into the corner.
France were rattled but went in on level terms when referee Antonio Mateu Lahoz deemed that Nelson Semedo had bundled over Kylian Mbappe on the stroke of halftime.
Benzema buried the penalty and two minutes after the break was picked out by Pogba and the striker, shown to be just onside by a VAR check, slotted the ball past Rui Patricio.
The game’s third penalty, a Euros record, was awarded for a handball by Jules Kounde and Ronaldo beat Lloris again from the spot to register his fifth goal of the goal tournament.
Germany salvage late 2-2 draw against Hungary to head for Euro last-16

A late Leon Goretzka goal salvaged a 2-2 draw for Germany against Hungary on Wednesday night, in a whip-saw contest that sets the Germans up for a June 29 Round-of-16 match against England at Wembley.
Hungary looked like they would shock their hosts and send them out of the tournament after Adam Szalai’s diving header in the 11th minute to open the scoring.
Kai Havertz eventually drew Germany level in the 66th minute, only for Hungary to retake the lead seconds after the re-start as Andras Schaefer ran onto a pass and headed in.
Goretzka bagged the crucial equaliser in the 84th minute to send Germany through in second place behind France in Group F on four points.
The run-up to the game had been overshadowed by UEFA’s refusal to allow the stadium to be lit in rainbow colours to oppose a Hungarian anti-LGBTQ law, and a protester waving a rainbow flag invaded the pitch ahead of kickoff.
It was all business for the hosts once the whistle was blown, however, as they were desperate to avoid a repeat of their shock 2018 first round World Cup exit, with Joshua Kimmich testing keeper Peter Gulacsi after three minutes.
But it was the Hungarians who then stunned the home crowd with Szalai’s diving header on the break.
The Germans had close to 70% possession in the first half and Mats Hummels hit the crossbar with a powerful header, but other than that they showed little of the attacking spark they demonstrated in their 4-2 win over Portugal.
They struggled to get past the packed Hungarian defence and into the box, while Robin Gosens and Kimmich on the wings had little space to operate.
Germany, who had never gone out at the group stage of consecutive major tournaments, showed nerves as their game gradually became more and more scrappy.
It was also a scrappy goal that brought them level, with Gulacsi failing to connect with a Kimmich free-kick, Hummels heading the ball on and Havertz nodding in.
But as the German fans celebrated in the stands, Hungary scored straight after the restart, with Szalai lofting the ball into the German half and Schaefer lunging forward and heading it past keeper Manuel Neuer.
With Hungary defending desperately to protect their spot in the knockout stages, Toni Kroos tried his luck from a tight angle but his effort flashed wide.

The German pressure finally paid off in the 84th when substitute Jamal Musiala cut the ball in the box and fellow substitute Goretzka drilled it home to avoid another tournament fiasco for the Germans and set up a mouth-watering round of 16 match against England at Wembley. (Reuters)