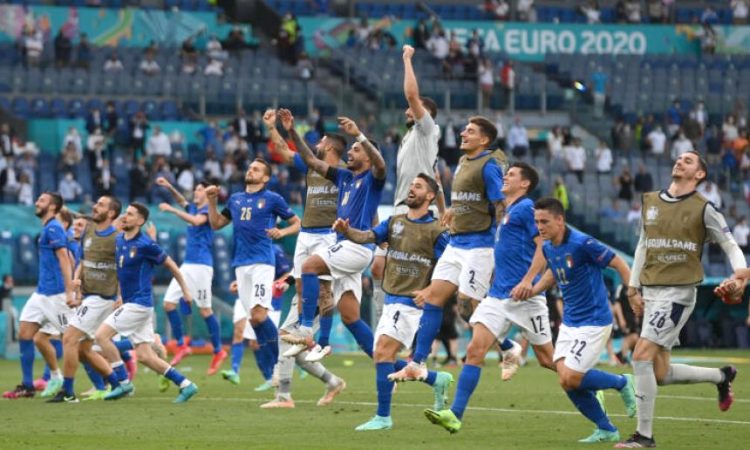 ROME, June 20: Italy topped their group in the European Championship after a third straight win on Sunday, with a first-half goal from Matteo Pessina giving them a 1-0 victory over 10-man Wales, who also advance to the knockout stages of the competition.

The Italians had already guaranteed their progress, while Wales secured a berth too by finishing ahead of Switzerland on goal difference. The Swiss, who could still advance as one of the four best third-placed teams, beat Turkey 3-1 in Baku.
Italy manager Roberto Mancini made eight changes to rest most of his first-choice starters, but Italy still dominated and missed several chances either side of Pessina’s 42nd-minute goal, when he steered a low Marco Verratti free kick into the far corner.
Welsh centre back Ethan Ampadu was shown a straight red card in the 55th minute for stamping on Federico Bernadeschi’s foot, and Wales then missed their best chance of an equaliser in the 74th when Gareth Bale volleyed over the bar from close range.
Italy will next face the runners-up of Group C, while Wales will take on the runners-up of Group B.
Euro 2020: Spain in ‘huge mess’ after another draw
Spain’s Euro 2020 had been turbulent before it began due to COVID-19 complications, but now the crisis is on the pitch where players lack spark, confidence or cutting edge – and are in serious danger of a shock group stage exit.
Saturday’s 1-1 draw with Poland was a step back performance- wise from the opening 0-0 draw with Sweden and left Spain in the unexpected position of third in an unimposing Group E and needing to beat Slovakia in their last game to go through.
“The main word on my lips is frustration. If only we’d scored that penalty and all those chances. But we need to believe in ourselves and stay strong,” said defender Pau Torres.
Self-confidence looks the lowest in recent memory.
Gerard Moreno had scored all 13 penalties he took for Villarreal last season but smashed his spot-kick against the Poles’ post while Alvaro Morata – who looked to have recovered confidence after scoring the opener – fluffed the rebound.
“We’re in a huge mess,” said the front cover of newspaper Marca, while daily AS said Spain were “on red alert”.
Spain’s midfield, which used to be the team’s heartbeat, looked sloppy and slow, unable to cope with an aggressive Poland who disrupted their passing and forced them to hurry.
‘PITCH HARMING US’
For the second game in a row, instead of hailing home advantage, players blamed the La Cartuja pitch.
“The pitch wasn’t in the best state for us to execute our style of play against a team that sat deep. The pitch is harming us a lot,” said midfielder Rodri.
Poland managed to cause Spain plenty of problems with their direct play, hitting the woodwork twice and equalising with a towering header from the talismanic Robert Lewandowski.
Coach Luis Enrique was unhappy with Sweden’s tactics in the first game but doffed his cap to Paulo Sousa’s side.
“I’d hoped we could have played better but we have to recognise the power of Poland and the excellent game they played. They pressed us very high and blocked our passing avenues. They impressed me,” he said.
Fans booed Spain off the pitch in a new chapter of disarray for Luis Enrique, who was criticised for leaving Sergio Ramos out of the squad and then faced huge upheaval when captain Sergio Busquets tested positive for COVID-19.
Busquets watched the Poland game from the sidelines and is expected to return for the crunch encounter against Slovakia, when Spain will be fighting to avoid a second group stage exit since the Euros was expanded to 16 teams in 1996.
“We have to be more united than ever, we have to win no matter what and that’s what we’re going to do,” said midfielder Pablo Sarabia.

Defender Pau added: “It’s as if the knockout stage starts for us on Wednesday.”(Reuters)