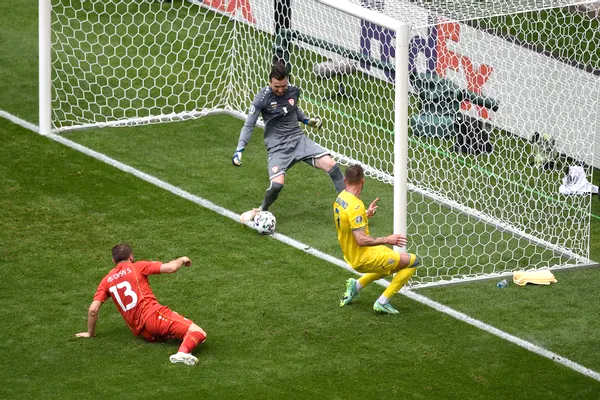 BUCHAREST, June 17: Andriy Yarmolenko scored one goal and set up Roman Yaremchuk for another as Ukraine defeated North Macedonia 2-1 to boost their last-16 hopes at Euro 2020 on Thursday.

The West Ham forward grabbed the opener on 29 minutes in Bucharest and then teed up Yaremchuk with a brilliant first-time pass to double the lead five minutes later.
Ezgjan Alioski pulled a goal back for North Macedonia just before the hour as he converted the rebound from his missed penalty, while Ukraine midfielder Ruslan Malinovskyi also saw a late spot-kick saved.
Andriy Shevchenko’s side are now level on three points with Austria and the Netherlands in Group C after Ukraine ended a six-match losing run in the competition.
Major tournament newcomers North Macedonia have lost their first two games and will be eliminated if the Dutch avoid defeat to Austria in Amsterdam, where victory for either side will secure a spot in the knockout phase.
Ukraine’s 3-2 loss to the Netherlands last weekend saw them match the longest losing run in tournament history, a record shared with Yugoslavia, but they reignited their last-16 bid with a deserved victory over the Macedonians.
Yarmolenko edged closer to Shevchenko’s all-time leading mark of 48 Ukraine goals, striking for the third game in a row as he slotted in from point-blank range after Oleksandr Karavaev’s clever flick at a corner.
Yaremchuk had been guilty of wasting an excellent early chance when clean through on goal, but the Gent striker made no mistake when Yarmolenko’s brilliant pass put him in the clear, squeezing the ball between Stole Dimitrievski and his near post.
The North Macedonia goalkeeper reacted superbly to hold a deflected drive from Karavaev, moments after veteran captain Goran Pandev had an effort disallowed for offside at the other end.
Dimitrievski clawed away Malinovskyi’s free-kick early in the second half, keeping the Macedonians in the game after Georgiy Bushchan turned behind well from Arijan Ajemi.
North Macedonia, who shocked Germany in World Cup qualifying in March, got back into the game seconds after Bushchan’s magnificent save tipped a curling effort from Aleksandar Trajkovski onto the crossbar.
Karavaev fouled Pandev as the two chased the rebound, and although Bushchan palmed away Alioski’s spot-kick, the Leeds player slammed in the follow-up to give the Macedonians renewed optimism.
Bushchan parried another long-range drive from Trajkovski as Ukraine held on to win despite wasting two great chances in the closing stages.
Substitute Viktor Tsygankov poked wide after a flowing move, and Malinovskyi’s penalty was turned away by Dimitrievski after a VAR review detected a handball by Daniel Avramovski.
Locatelli, Immobile fire Italy into Euro 2020 last 16
Manuel Locatelli scored a brace and Ciro Immobile added a late third as Italy sealed their place in the Euro 2020 last 16 on Wednesday with a game to spare after a 3-0 win over Switzerland in Rome.
Sassuolo midfielder Locatelli put the Azzurri ahead after 26 minutes in the Group A clash, adding a second just after the break with Immobile scoring for the second consecutive game a minute from time.
Roberto Mancini’s side are top of Group A with six points from two games, with six goals scored and none conceded, two points clear of Wales who beat Turkey 2-0 earlier.
Italy will advance as Group A winners if they avoid defeat against surprise Euro 2016 semi-finalists Wales at the Stadio Olimpico on Sunday.
The only bad news for the Italians in a game they dominated was the loss of captain Giorgio Chiellini who hobbled off the pitch with a muscle injury in the first half.
The 36-year-old Juventus defender had a 20th-minute goal ruled out for handball by VAR and four minutes later asked to be replaced, holding his thigh.
Lazio defender Francesco Acerbi took his place, making his debut in a major international tournament at the age of 33, with the captain’s armband handed to Juventus teammate Leonardo Bonucci.
Italy gave the Swiss no space in another commanding display, having beaten Turkey 3-0 five days ago in Rome.
Lazio forward Immobile once again led Italy’s three-man attack, flanked by wingers Lorenzo Insigne and Domenico Berardi.
Immobile missed several changes to add to his tally sending a header over the bar early from a Leonardo Spinazzola cross.
After Chiellini’s exit, Locatelli started the move which reaped the opener, combining with Sassuolo teammate Domenico Berardi, who weaved into the area and steered across for the former to the finish off.
Swiss keeper Yann Sommer denied Immobile and an Insigne follow-up was cleared off the line after half an hour.
Another well worked move resulted in Italy’s second goal, Nicolo Barella teeing up Locatelli to drive in from 20 yards.
It brought his tally to three goals in 12 appearances for Italy since making his debut last September.
Switzerland had few chances with Liverpool’s Xherdan Shaqiri sending over after an hour while Italy goalkeeper Gianluigi Donnarumma denied Steven Zuber their best effort minutes later.
For Italy it was a 10th consecutive win with a clean sheet, extending their unbeaten run to 29 matches since September 2018 — just after failing to qualify for the last World Cup.

Italy have now scored two goals or more in each of their last 10 international matches.
Mancini meanwhile moves within one game of Italy’s two-time World Cup-winning coach Vittorio Pozzo’s record of 30 unbeaten games between 1935 and 1939. (AFP)