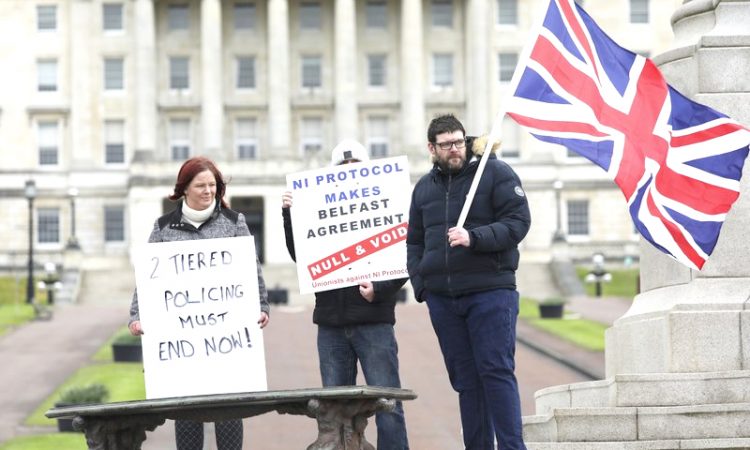 Brussels, April 16: Top European Union and British officials failed to get a breakthrough at talks on Northern Ireland trade rules and said Friday that contact would continue over the coming weeks.

The dinner meeting late Thursday between European Commission Vice President Maros Sefcovic and U.K. Brexit minister David Frost took place a month after the EU started legal action against its former member country, arguing that the UK had not respected the conditions of the Brexit agreement and violated international law.
A British statement said that a number of difficult issues remained and it was important to continue to discuss them.
Frost said that there should be intensified contacts at all levels in the coming weeks.
The two sides are trying to find common ground on trade rules in Northern Ireland, where Britain’s exit from the EU has unsettled a delicate political balance.
Northern Ireland is part of the U.K. but remained part of the EU’s single market for goods after Brexit to avoid checks at the territory’s border with EU member Ireland. An open Irish border helped underpin the peace process that ended decades of sectarian violence, allowing people in Northern Ireland to feel at home in both Ireland and the U.K.
Unionists say the arrangement the British government and the EU worked out has amounted to the creation of a border between Northern Ireland and the rest of the UK
The EU and UK agreed on the post-Brexit trade deal on Christmas Eve but its application is still provisional until the EU’s legislature approves it, theoretically by the end of the month.
Some EU legislators are threatening to hold back the parliamentary approval vote until they receive further assurances from London on the issues Frost and Sefcovic were discussing.
European Union Parliament committees overwhelmingly backed the trade deal Thursday.
In March, London decided to unilaterally extend a grace period until October on checks for goods moving between Britain and Northern Ireland, a decision that led the EU to issue a formal notice to its former member. The U.K was given one month to respond. (AP)